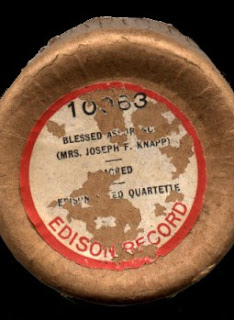 Today's hymn is perhaps the most familiar and popular ever written by two women. Though Fanny Crosby has been mentioned here before, this is the first of her gospel songs that I've featured. It's kind of unlikely that we will ever get through all of them because it's reported that she wrote more than 5000. Many of them were published under pseudonyms because her publishers didn't want their hymnals to appear to be overly dominated by her texts. Her collaborator here, Phoebe Knapp, may have written as many as 500 tunes and songs, though her other tunes are generally more obscure than many of Fanny's other texts.

The two women were good friends, both members of the John Street Methodist Church in New York City. The story goes that Phoebe wrote the melody first and played it for Fanny, asking "what does this song say?" Fanny immediately replied "Why, that says 'Blessed assurance, Jesus is mine!'" and the rest of the text quickly followed.

Blessèd assurance, Jesus is mine!
O what a foretaste of glory divine!
Heir of salvation, purchase of God,
Born of your Spirit, washed in your blood.

Perfect submission, all is at rest,
I in my Savior am happy and blest,
Watching and waiting, looking above,
Filled with your goodness, lost in your love.
Refrain

This song was immediately popular and probably appears in hundreds of hymnals published in the last 135 years. A wax cylinder recording of the song (pictured above) was released in 1909 by the Edison Phonograph Company and can now be heard online.

Phoebe Knapp's husband was one of the founders of the Metropolitan Life Insurance Company. She went on a trip to Europe in 1883 and when she returned, she found that he had built an addition on their Brooklyn mansion that included a lavish music room for her (pictured below), with a three-manual pipe organ. Phoebe and Fanny probably spent a good deal of time in this room, writing and singing together. Following her husband's death, Phoebe moved to the Savoy Hotel in Manhattan, bringing the organ along. 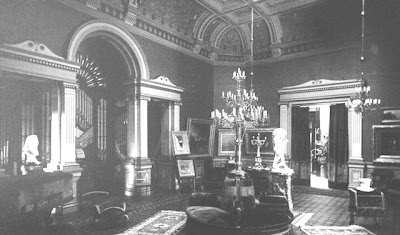 "Blessed Assurance" is one of my favorite hymns, C.W.S. Thanks for telling the story of it.

And I love that Phoebe Knapp's husband built that music room for her while she was away. What a loving husband!