With the Oxen Standing By 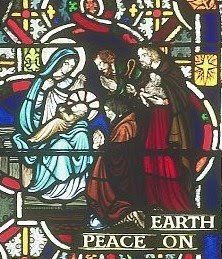 Cecil Frances Alexander published her popular Hymns for Little Children (text only, no music) in 1848. She wrote these hymns to explain various parts of Christian doctrine, and today's hymn was to illustrate a portion of the Apostles' Creed (...conceived by the Holy Ghost and born of the Virgin Mary...)


Once in royal David's city
Stood a lowly cattle shed,
Where a mother laid her baby
In a manger for a bed:
Mary was that mother mild,
Jesus Christ, her little child.

You came down to earth from heaven,
As the living God of all,
And your shelter was a stable,
And your cradle was a stall;
You, with all the meek and lowly,
Lived on earth, our Savior holy.

For you are our lifelong pattern,
Day by day like us you grew;
You were little, weak and helpless,
Tears and smiles like us you knew.
And you feel for all our sadness,
And you share in all our gladness.

And our eyes at last shall see you,
Through your own redeeming love;
For that Child so dear and gentle
Now is Christ in heaven above;
And you lead your children on
To the place where you have gone.

Not in that poor lowly stable,
With the oxen standing by,
We shall see you; but in heaven,
Set at God's right hand on high;
Where like stars your children crowned,
Shall with joy your courts surround.

Composer Gauntlett wrote this tune specifically for Mrs. Alexander's text, and it remains his most well-known. There have been a few other unsuccessful attempts at writing a new tune, such as Katie Smith's in 1876, but none have lasted.

Ever since 1919, this hymn has been used as the opening processional for the Festival of Nine Lessons and Carols at Kings College, Oxford University (broadcast around the world since 1928). 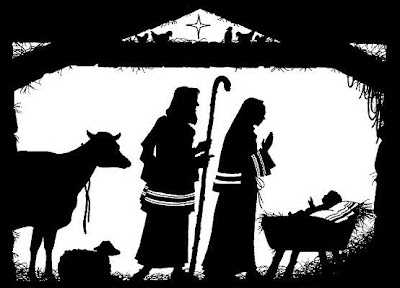 Merry Christmas to all and to all a good afternoon! We don't sing this in Fremont with any frequency because it's not in our (rather pedestrian) Hymnal for Worship & Celebration.

The pairing is indexed 12 times so far in my grand list; also, two other texts are set to Irby: the New Century Hymnal (UCC) uses the tune for "Jesus, take us to the mountain", and Hope's The Worshiping Church sets "For your holy Book we thank you" to it.

Our service last night, with 12 in attendance including 4 neighbors who usually don't go to church, was a lessons and carols approach; the organist was snowed in (as were most church members; the street in front of the church is officially closed) so we sang as best we could a cappella and sans rehearsal. The songs (following words of greeting and the lighting by the pastor of the fourth advent candle—Sunday service was canceled, you may recall—and the Christ Candle) were
* O Come, All Ye Faithful (3 vv)
* Joy to the World (4 vv)
* Lo, How a Rose E'er Blooming (2 vv; this was read by the pastor, perhaps out of fear of what the unfamiliar might do to the tune)
* O Little Town of Bethlehem (St. Louis vv 1,2,4)
* Away in a Manger (Mueller, 2 vv)
* Angels We Have Heard on High (3 vv)
* The First Noel (vv 1,2,4)
* We Three Kings (vv 1,2,5)
* Emmanuel (McGee)
* Silent Night (3 vv)

Nothing flashy or even particularly special, but Christ was present and honored. The pastor gave a nice little homily based on Isaiah 7 and a recent Verizon Blackberry commercial between "Emmanuel" and "Silent Night".

Oh dear, O little town of Bethlehem without the third and fourth verses? (you probably sang 1, 2, and 5)

...Where charity stands watching,
And faith holds wide the door.
The long night wakes, the glory breaks,
And Christmas comes once more.

Though you probably ended up singing more than we did -- we did all the verses, but only 5 hymns:

Same five every year, it seems, and some repeated today and this coming Sunday. I don't ever recall singing The first nowell here, for example -- someone must especially dislike it.

Yes, the verse numbers I gave are per Hymnal for Worship & Celebration. Virtually all of them "actually" have more verses than our hymnal, of which I am not greatly enamoured, permits us.

If you did "all the verses" of "O come, all ye faithful", do you mean all seven, or just the four from Wade, or how many? Normally (when there are enough other singers that I don't stand out too much in my singularity) I sing it in Latin (as far as I can remember it anyhow), but last night out of deference to everybody else, I sang it in English.

Thanks for pointing me to the King's College site; I've been there before, but this is the first time I've noticed the version of "Es ist ein Ros" they use, and which I really like, though I can see why it's generally supplanted by "Lo, how a rose".

We sang the six verses of O come, all ye faithful from the Hymnal 1982 which are credited to Wade, but apparently to different translators.

The inclusified version, used in MCC, retains the Latin for the refrain rather than changing the English, which I think is a bit of a cop-out (if it's male in English, it's still male in Latin), but it would be impossible to make any other change, as no one would follow it. (so, too, the herald angels still sing to the newborn King - some things are too deeply ingrained for revision)

Of course, one could engage in a wee bit of guerrilla affirmative action and sing "Dominam"; I would do that if given the chance. (We sing the old words of "Praise God, from whom all blessings flow" at Fremont, but I almost always sing "God" for the two "Him"'s, and "Creator, Savior, Holy Ghost" for the last line.)

So the Episcopalians attribute to Wade the verses my copy says are by Abbé de Borderies, eh? I'll have to revisit that field. Actually, I see ingeb.org has eight Latin verses, and ascribes them all to Wade.