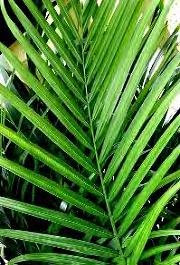 Holy Week begins today with Palm Sunday, as we commemorate Jesus' triumphant entrance into Jerusalem, only days before everything would change.

There are many different traditions in various Christian denominations, but a procession of some kind with palm branches is often included, and many churches encourage their youngest members to participate. This hymn first appeared in a collection of poems primarily for children, Sunshine and Shadow (1873) by Jennette Threlfall, but it has entered many hymnals for general use (often with a combination of the second and third verses, with some lines left out).

Hosanna, loud hosanna,
The little children sang;
Through pillared court and temple
The lovely anthem rang --
To Jesus, who had blessed them
Close folded to his breast,
The children sang their praises,
The simplest and the best.

From Olivet they followed
'Mid an exultant crowd,
The victor palm branch waving,
And chanting clear and loud.
Bright angels joined the chorus
Beyond the cloudless sky,
"Hosanna in the highest!
Glory to God on high!"

Fair leaves of silvery olive
They strewed upon the ground,
While Salem's circling mountains
Sent back the joyful sound.
The Savior of the nations
Rode on in lowly state,
Nor scorned that little children
Should on his bidding wait.

“Hosanna in the highest!”
That ancient song we sing,
For thou art our Redeemer,
To thee our thanks we bring.
O may we ever praise thee
With heart and life and voice,
And in thy blissful presence
Eternally rejoice!

ELLACOMBE is one of those tunes everyone seems to know and that congregations sing well. I've managed to hold off from using it for more than a year because it's not a favorite of mine (three of its four lines are practically identical), but I can't deny that it works. 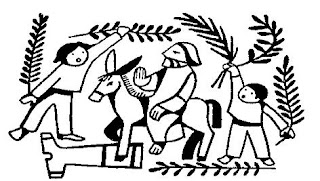 One Year Ago: Palm Sunday

I agree with you that Ellacombe (like Hyfrydol, which I've complained about in this connection before) is both very easily sung and very heavily overprescribed. Have you ever tried this hymn with any other tune?

We capped Palm Sunday with a congregational portrait, modeled on this ca. 1930 photo of the church orchestra; by way of comparison, our current congregation (35 of the 41 in attendance, plus historian Paul Dorpat, in the rainbow cap, who arranged the shoot. I'm the guy in the purple shirt, and our pastor is the lady in the front row holding a branch over her stole. I know that's a bit off topic from hymnody, and I apologize, but I like the pictures.

I keep track of what we sing and when very diligently. I try to alternate using Ellacombe on either Palm Sun. or Easter from year to year. We sang it yesterday with 3 verses of the above; without having my hymnal with me, I'd say they were 1, 2 and 4 with some alterations.

Leland - I like the 2 photos! Having someone hold the original photo was a great idea.

Thanks, AuntE; and the woman holding the original photo is a granddaughter of the man on the right in it holding a cello and the woman three spots to his right.

When you use Ellacombe on Easter, what text do you sing to it? "The Day of Resurrection" is the obvious one, but I'm sure there are others. At Fremont I'd say we most often sing Ellacombe with "I Sing the Mighty Power of God"; "The Day of Resurrection" isn't in our hymnal, and we only sing "Hosanna, Loud Hosanna" maybe every other year. Yesterday's songs were "Lord of the Dance", "All Glory, Laud and Honor" (the 3-stanza approach but recapitulating the first after the procession, which went outside and up the sidewalk and back into the church), "O Sacred Head, Now Wounded", "Were You There?" (3 vv.), "Saved by Grace" (i.e. the refrain of "Some day the silver chord will break") 3 times through before Communion, and "Lead Me to Calvary". The last I don't think I'd ever sung in church before, at least not since my conversion, and while overall it was quite fitting, I found the suggestion that Jesus slept peacefully from interment to resurrection a bit doubtful. Perhaps since we Baptists don't do creeds our folk don't think of the "descended into hell" bit, but it did come to my mind as I sang "Angels in robes of light arrayed / Guarded Thee whilst Thou slept." Oh, and I was the voice of Jesus in the Gospel Lection, a dramatic reading of Mark's Passion.

I have not tried this text with a different tune because I think this one works for it - a deliberate contrast to some of the more somber tunes and texts for the season. But there ae several other common texts for ELLACOMBE that I would probably prefer to different tunes.

I was a bit unclear about the three-verse version generally seen in modern hymnals. The first and last verses are retained; the middle verse takes the first four lines of the second verse, followed by the last four lines of the third verse. I didn't even know there were four verses until recently.