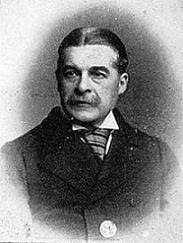 The birthday of composer Arthur Sullivan (May 13, 1842 - November 22, 1900) is probably observed today by a good many of his admirers, though most of them have far less interest in his church music and hymn tunes than in his comic operas written with W.S. Gilbert.

As we know, Sullivan did write a good number of hymn tunes, probably around 50, and arranged or harmonized several more. This link takes you to more than 60 (including some arrangements), with sound files and printable scores, while the Cyber Hymnal, which we most frequently use here, only lists 33. Having been interested in Sullivan's tunes for many (many) years, I can say that I'm not sure that the list at the first link is even complete and that there may be a few more. If you click on the Sullivan tag following this entry, you can revisit all the tunes I've used so far on the blog (I'd even forgotten using one or two).

Since we are still in the season of Eastertide for another week or so, this seems to be the most appropriate tune for today. I think it's his second greatest tune, though it's far less known than his first, which we saw last year. Yes, it's a little trickier to sing, particularly the last line. The text, by Christopher Wordsworth, is "seeded" with spring-ish references to new life and growth to complement the resurrection theme.

Now the iron bars are broken,
Christ from death to life is born,
Glorious life, and life immortal,
On this holy Easter morn.
Thou hast triumphed, and we conquer
By thy mighty enterprise:
We with thee to life eternal
By thy resurrection rise.

Christ is risen, Christ, the first fruits
Of the holy harvest field,
Which will all its full abundance
At the second coming yield:
Then the golden ears of harvest
Will their heads before thee wave,
Ripened by thy glorious sunshine
From the furrows of the grave.

Christ is risen, we are risen!
Shed upon us heavenly grace,
Rain and dew and gleams of glory
From the brightness of thy face;
That with hearts in heaven dwelling,
We on earth may fruitful be,
And by angel hands be gathered,
And be evermore with thee.

This tune is heard as a bit of an in-joke at the very beginning of the film version of The Pirates of Penzance, starring Linda Ronstadt and Kevin Kline (not yet on DVD, unfortunately). The camera swoops in from above on the seaside village of Penzance, stopping in the village square, outside a church where we hear the congregation singing. Most fans of Pirates probably don't know it's this Sullivan hymn tune they're hearing. But, since the operetta takes place on February 29 (pirate apprentice Frederic's birthday), and presumably during Lent, I hope they are not singing this Easter text yet! (it's hard to make out the words, as I recall)

Just two weeks ago, we saw another Sullivan tune, ST. KEVIN, which is most often set to another Easter text. As it happens, there are two more of his tunes that are also associated with Easter hymns: FORTUNATUS, most often sung with Welcome, happy morning; and RESURREXIT, written for a less familar text that begins Christ is risen! Christ is risen!

Four tunes for Easter texts from the same composer may seem excessive, though I would not be surprised to learn of a church where all four were sung in the same service. On the other hand, could we really expect several Lenten tunes from the composer of H.M.S. Pinafore and The Pirates of Penzance? What better season for "happy" tunes? I think that Sullivan was temperamentally drawn to more joyful texts, and that these four tunes are all somewhat better than some of his more "serious" ones, though you can judge for yourself if you want to slog through a few of those sixty-some others linked above.

Lux Eoi is extremely (unconscionably?) rare in Baptist hymnals, which I'm afraid do tend to be a bit dumbed down in several respects, grand hymn tune repertory being one such. Anyhow, I took the occasion to subscribe (for the first time, which surprises me) to Savoynet. Looks to me like the owner has pretty much retired, but it accepted my subscription - maybe: I got two messages back, as follows:

I am going to just ignore the error message, which reads

and go with the second one which states I have been enrolled...

I'm a bit surprised I haven't joined Savoynet previously. In particular, back in the late 90s when I was posting things like Heroine Barbarian on my Lilandejo site, and had way more free time on my hands than I have now, I would have been a natural net-Savoyard.

There are only 12 occurrences of "Alleluia! Alleluia! Hearts to heaven" in the 35 hymnals I have indexed to date, and of these only one is set to Lux Eoi; 7 use Hymn to Joy, 2 Weisse Flaggen, and one each In Babilone and (¡) Antilutron (!). There is also one hymnal (New Century) that sets a text hadn't otherwise heard of, "Standing at the future's threshold", to Lux Eoi; judging by Google, this text's currency is pretty much limited to UCC circles. In any event, I'll make a point of including Lux Eoi, to one text or the other, in my Evergreen Sings.

You might think that after 15 years or so there couldn't be much more to discuss about Sullivan & Gilbert, but they do go on over there on the Savoynet mailing list. I rarely look in anymore, but a friend of mine sent a link to this post, which accounts for the spike in traffic here (though not comments -- perhaps for the best).

I think that using Standing at the future's threshhold, to this tune puts the "at" in a silly place in the musical line, but not everyone seems to think of these things.