No Price I Bring 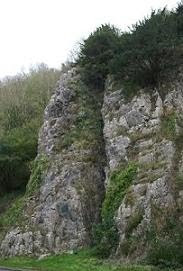 This rock by the side of the road in Burrington Combe, Somerset, has become famous for inspiring one of the most loved hymns in our repertory. The story goes that during a bad thunderstorm, Augustus Montague Toplady (whose birthday I missed earlier this week), then the curate of a nearby village, sought shelter in the cleft of the rock. There is now a plaque installed on the side of the cliff which recounts the legend for tourists.

The story has been the subject of debate for the last hundred years, with many scholars now rejecting it for one reason or another, but it will go on nevertheless. Whether or not there was an actual sheltering rock, Toplady may also have taken his inspiration from 1 Corinthians 10:4: For they drank of that spiritual Rock that followed them, and that Rock was Christ.

Rock of Ages, cleft for me,
Let me hide myself in thee;
Let the water and the blood,
From thy wounded side which flowed,
Be of sin the double cure;
Save me from its guilt and pow'r.

Should my tears forever flow,
Should my zeal no languor know,
All for sin could not atone;
Thou must save, and thou alone.
In my hand no price I bring,
Simply to the cross I cling;

While I draw this fleeting breath,
When mine eyes shall close in death,
When I soar to worlds unknown,
And behold thee on thy throne,
Rock of Ages, cleft for me,
Let me hide myself in thee.

Toplady's text has been much altered in many hymnbooks since its first appearance in the Gospel Magazine in April 1776. Probably the first change was in the final verse, which originally read "when my eye-strings break in death." The tune by Robert Hastings is nearly always used in the US, but in other parts of the world they sing it to REDHEAD. Regardless of text or tune changes, this hymn has ranked at or near the top of many hymn surveys over the last hundred years.
Posted by C.W.S. at Sunday, November 08, 2009

Its certainly one of my favorites although we haven't sung it in church for...dare I say...ages. It must be that its not a favorite of our current music director.

Yes, our music directors can serve as gatekeepers that allow or deny us our hymns! (though sometimes it's the clergy that make their preferences known indirectly)

The internet has lots of great resources to remind us of, or introduce us to, great hymns and songs of praise, but there's no substitute for actually singing them, preferably in the company of others.

Hymnal editors also play their part. The soon-to-be-published Celebration of Grace hymnal, a moderate Baptist product slated to be published by Mercer University next March, is missing "Rock of Ages". Probably the most glaring omission in the list of proposed contents.

I still do think that's strange, ever since you mentioned it at your blog. Celebrating Grace has been announced as a featured showcase title for next summer's Hymn Society conference, and if this hymn is really missing, there may be a question or two for its committee (many of them HS members). IIRC, they also left out Nearer, my God to thee.

You're right, I hadn't noticed the the absence of Nearer, My God, to Thee because it's not in the absolute top tier of frequent hymns in my Region's crop of hymnals. The PDF version of Celebrating Grace's hymn list is located here for perusal.

Wow! To this total non-musician, those seem like two glaring omissions.