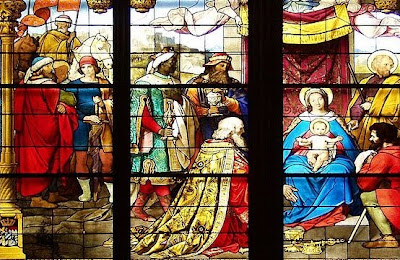 Though the Feast of the Epiphany does not occur until the twelfth day after Christmas, many churches will observe it today. Today's most well-known Epiphany hymn is assumed by most people to be a Christmas carol, so it more or less falls within our series.
The story of the magi from the east that follow a star to Bethlehem to pay homage to the newborn Jesus is only told in Matthew 2:1-12. They aren't called "kings" there (nowhere does it say there were three of them either) but apparently it was a later assumption that only kings could afford the gifts they brought. Verses from the Old Testament such as Isaiah 60:3 and Psalm 72:10-11 also prophesy about kings coming and bringing gifts to the Messiah. Online you can read much more about the various legends surrounding these visitors and how those legends developed over time.

We three kings of Orient are;
Bearing gifts we traverse afar,
Field and fountain, moor and mountain,
Following yonder star.

Born a king on Bethlehem’s plain
Gold I bring to crown him again,
King forever, ceasing never,
Over us all to reign.
Refrain

Frankincense to offer have I;
Incense owns a Deity nigh;
Prayer and praising, voices raising,
Worshipping God on high.
Refrain

Myrrh is mine, its bitter perfume
Breathes a life of gathering gloom;
Sorrowing, sighing, bleeding, dying,
Sealed in the stone-cold tomb.
Refrain

John Henry Hopkins wrote this for a Christmas pageant at the (Episcopal) General Seminary in New York where he was the first music instructor. It was first published in his collection Carols, Hymns, and Songs (1863), where, as you can see, only the refrain was to be sung by the congregation. Three (presumably male) soloists sang the first and last stanzas in three-part harmony, and each sang one stanza of the middle ones. This arrangement was used in many hymnals from the nineteenth century, though rarely, if ever, today. I don't think I've ever been anywhere where it was sung like that.

Hopkins is now only known for writing the words and music of this hymn, but of course he was much better known in his own day. He wrote several other hymn texts and tunes, as well as service music for the Episcopal Church. At the Cyber Hymnal site you can see three more of his Christmas hymns from his 1863 collection, and the titles of several more hymns at the Hymnary.org site.

One Year Ago: Star of the East

CWS, I have heard this carol sung in the way you described. As I think about it, I believe it was on a CD perhaps from one of the English cathedral or college choirs. Today, the minister made an effort to have the middle 3 verses sung by different sections in the congregation, but one half of the sanctuary had decidedly fewer people sitting there! So the effort was not 100% successful. Fun though!

As part of the prelude today, I played the OLD song, "Star of the East" by Amanda Kennedy.

Tradition is a good thing, as is musical excavation!