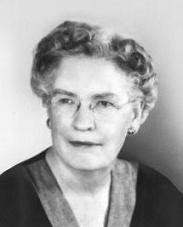 Methodist theologian and hymnwriter Georgia Elma Harkness was born today in 1891. After graduating from Cornell University in 1912 she taught school for a few years before entering graduate studies in religion at Boston University. She was ordained in the Methodist Church in 1926, but women were not given full clergy privileges and responsibilities until 1956.


She became the first woman professor of theology at a major seminary, first at Garrett Biblical Institute in 1940 and then at the Pacific School of Religion in Berkeley, CA. She also accepted visiting professorships in Japan and the Philippines.

Harkness was a prolific writer, publishing more than thirty books, the last published posthumously after her death in 1974. Three of those books were poetry, and included some of her hymns. In 1954 she wrote her most well-known hymn, Hope of the world, which was the winning entry in a contest sponsored by the Hymn Society of America, for a hymn to be sung that year at the opening service of the World Council of Churches (an organization that Harkness had helped found). Hope of the world was included in many hymnals published over the next forty years; it's likely to be in your own church's hymnal.

Harkness's hymns were written on a variety of subjects. Hope of the world is a hymn of social justice, perhaps illustrating a quote from her that "it is easier to praise Jesus than to follow him." At the 2008 Hymn Society Conference, we sang a number of her less-familiar hymns, including one on the subject of recovery from depression. Harkness herself went through a long period of depression in the early 1940s, after a period of illness and isolation. In 1944 her pastor introduced her to another member of their congregation, a musician named Verna Miller. The two women moved in together and remained together until Harkness died thirty years later. After Harkness retired from the Pacific School of Religion, she and Miller wanted to move into a retirement residence in nearby Claremont but were denied, so they bought the house next door and were fully part of the social circle of the other retirees.

Her books were out of print for many years but a new collection of her early essays was published last month, Georgia Harkness: the Remaking of a Liberal Theologian.


One Year Ago: Reginald Heber

I think the 1996 Covenant Hymnal sets "Hope of the World" to a new tune. And I notice that while Celebrating Grace doesn't have "Hope of the World", it has her "God of the Fertile Fields" (to AMERICA) and it has "This is my song", to which she wrote a third verse more specifically Christian than the first two by Lloyd Stone.