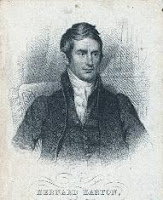 Today is the birthday of Bernard Barton, known as England's 'Quaker Poet' in the early nineteenth century. He was the author of several volumes of hymns and poems mostly written during his long employment as a bank clerk.

He was educated at a Society of Friends boarding school in Ipswich, but left school at fourteen to serve an apprenticeship in a shop.  He eventually married the shop owner's niece Lucy in 1807, but a year later she died giving birth to their first child, also named Lucy.  In 1809 Barton took a post in the Dykes and Samuel Alexander’s Bank, where he remained for the next forty years.  The Guide to the Pilgrim Hymnal (1966) quotes one source as saying "So punctual and methodical was he that, as he returned from the office each midday, the housewives knew it was the correct time to put their potatoes into the water as he passed their doors..."

His first book of poetry, Metrical Effusions, was published in 1812, and eventually he became friends and correspondents with several of the well-known poets of his day.


Fear not, Zion's sons and daughters,
Perfect love shall cast out fear;
When you pass through deepest waters,
I, your God, will still be near.

In the furnace of affliction,
I will save you from despair;
Love divine shall bring conviction
That my peace is 'round you there.

Never shall you be forsaken,
Nothing shall have pow'r to harm;
While your faith remains unshaken,
In my mighty outstretched arm.

Heights nor depths shall from me sever
Those whom Christ has brought to me;
I will keep you safe forever
And your God and Savior be.