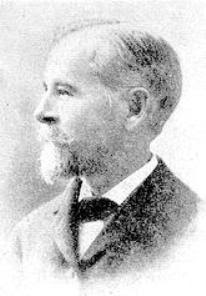 Frederick Lucian Hosmer (October 16, 1840 - June 7, 1929) was another Unitarian clergyperson and hymnwriter whose hymns are still sung today across many denominations.

He graduated first from Harvard University, then from Harvard Divinity School in 1869 and pastored churches in Massachusetts, Ohio, Illinois, Missouri and California. He was involved with two important hymnbooks: Unity Hymns and Chorals, which he co-edited with William Channing Gannett, first appeared in 1880 and was followed by The Thought of God in Hymns and Poems in 1885. Both of these books were updated in a number of subsequent editions, so that his later hymns (as well as other more recent texts by others) could be included.

In the early years of the twentieth century, noted hymnographer John Julian wrote "Amongst Unitarian hymn writers of the last twenty years Mr. Hosmer is the most powerful and original known to us." Hosmer was also an authority on hymnody, and was asked to present a series of lectures on the subject at Harvard in 1903.

The following hymn was written for the fiftieth anniversary of the Second Congregational Church in Quincy, IL (where Hosmer had been pastor from 1872 - 77).

O Light, from age to age the same,
Forever living Word,
Here have we felt thy kindling flame,
Thy voice within have heard.
Here holy thought and hymn and prayer
Have winged the Spirit’s powers,
And made these walls divinely fair,
Thy temple, God, and ours.

What visions rise above the years,
What tender memories throng
To fill the eye with happy tears,
The heart with grateful song!
Then vanish mists of time and sense,
They come, the loved of yore,
And one encircling Providence
Holds all forevermore.

O not in vain their toil who wrought
To build faith’s freer shrine;
Nor theirs whose steadfast love and thought
Have watched the fire divine.
Burn, holy Fire, and shine more wide!
While systems rise and fall,
Faith, hope, and charity abide,
The heart and soul of all.

Burn, Holy Fire! (from the last verse) is the title of a book by Jeremy Goring (2003). Goring writes:

"...Hosmer was referring to the Pentecostal fire of the Spirit. He believed that throughout history the upholders of religious "systems" had often sought to quench this fire. Standing as he did in the tradition of the New England Transcendentalists -- Emerson, Thoreau, Longfellow -- he was convinced that in due course all such systems, having outlived their usefulness, would disappear."

Many of Hosmer's other hymns were written on similar themes, foretelling the coming of the promised reign of God, beyond doctrine and denomination.
Posted by C.W.S. at Thursday, October 16, 2008

Are you sure the hymn was written for a church in Quincy, Illinois and not, say, Massachusetts. The harvardsquarelibrary.org website is not accessible this evening, and Wikipedia doesn't have an article on this Hosmer (though it has articles on several other Hosmers) and the cyberhymnal.org bio page is nearly empty, so I can't readily check his peregrinations, but given that Quincy, IL wasn't founded till 1818 I find it implausible that it should have had a Second Congregational Church by 1827, or indeed at any point in its history; Congregationalism is a marginal sect in the Midwest. But I could be wrong... Cyberhymnal.org might have its facts straight...

Offline as well as online sources all agree on Illinois. And there's no particular timeframe required for the formation of a "second" church -- it only takes one good church fight.

So what about the hymn?

You're right on all counts. In the decades preceding the Civil War I imagine both abolitionism and the trinitarian-unitarian issue were quite sufficient cause for a second or even third church in a lot of towns. (In a lot of cases when we Baptists birthed a Second Church, it was for the colored folk.) As for the hymn, it's a good hymn, though not to my sense of things a great one. I rather like the tune, which is unfamiliar to me (I associate Croft mainly with Hanover). I see two other texts set to St. Matthew: the generic-sounding "O Spirit of the living God" and the much more intriguingly incipited "The weaver's shuttle swiftly flies" (in the New Century Hymnal).

There I go off on a tangent again. I apologize...

ST. MATTHEW is probably best known in the Anglican/Episcopal world to Thine arm, O God, in days of old, but it's a good, strong, utilitarian C.M.D. tune. The weaver's shuttle swiftly flies is an interesting contemporary choice for it.