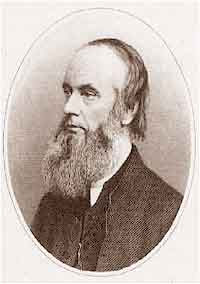 Today we mark the birthday of Henry Alford, born in London in 1810 and described by Wikipedia as an "English churchman, theologian, scholar, poet, hymnodist, and writer," which probably covers most of the bases. Demonstrating his scholarly talents quite early, he wrote his first book at age six, The Travels of St. Paul, from his Conversion to his Death, and also provided the illustrations (though I assume it was not published). He went on to compile his first hymnal at age eleven.

Following his ordination in the Church of England (as four generations of Alfords before him had done) , he served congregations in Leicestershire and London before being named dean of Canterbury Cathedral in 1857.

In 1844, he published a hymnbook called Psalms and Hymns Adapted to the Sundays and Holydays Throughout the Year, To Which Are Added Some Occasional Hymns. He arranged this book according to the church year, giving two hymns for each Sunday begining with the first week of Advent, one hymn for various saints' days and other commemorations, and "some occasional hymns" on various themes. His next hymnal, The Year of Praise (1867), compiled specifically for use at the cathedral, followed the same arrangement, but now with four hymns for each Sunday. He contributed several of his own hymn texts to each of these hymnals, and this is one of my favorites.

Ten thousand times ten thousand,
In sparkling raiment bright,
The armies of the ransomed saints
Throng up the steeps of light;
'Tis finished, all is finished,
Their fight with death and sin;
Fling open wide the golden gates,
And let the victors in.

What rush of alleluias
Fills all the earth and sky!
What ringing of a thousand harps
Bespeaks the triumph nigh!
O day, for which creation
And all its tribes were made;
O joy, for all its former woes
A thousandfold repaid!

O then what raptured greetings
On Canaan's happy shore;
What knitting severed friendships up
Where partings are no more!
Then eyes with joy shall sparkle,
That brimmed with tears of late;
Orphans no longer parentless,
Nor widows desolate.

Bring near thy great salvation,
Thou Lamb for sinners slain;
Show forth the glory prophets told,
Then take thy power, and reign;
Appear, Desire of nations,
Thine exiles long for home;
Show in the heavens thy promised sign;
Thou Source and Savior, come!

The reference to "ten thousand times ten thousand" comes from Revelation 5:11, referring to a very great number of angels. It actually totals one hundred million, which was fairly unimaginable in the days when Revelation was written, and even in Alford's time, though I suppose we are more used to hearing of such numbers today.

This hymn was sung at his graveside in 1871, probably with the tune that accompanied it in The Year of Praise: EASTHAM by Frederick A. Gore Ouseley. I assume that Dykes later composed ALFORD in memory of Henry, and ALFORD has been used ever since.

Alford also wrote a number of hymn tunes, eleven of which were published in The Year of Praise, harmonized by Thomas Evance Jones, the organist at Canterbury for more than forty years. (As we've seen before, one of the easiest ways to get your tunes published is to edit a hymnal yourself.) Some of them had rather unique names such as STARCROSS, QUINQUAGESIMA, and TENEBRAE, and of course, there were two named for saints, ST. THOMAS and ST. MILDRED. I've not seen any of these tunes used in other hymnals, and I'd guess that most people who have even heard of Alford don't realize that he wrote tunes as well as texts.
Posted by C.W.S. at Tuesday, October 07, 2008

I love the hymn text and I am very impressed at learning that Henry wrote his first book at age six (despite its not being published) and compiled his first hymnal at age eleven! Imagine how proud his parents were!

I wrote a few books in grade school, but none by age six that I recall. My magnum opus was Human Anatomy for Children, and I like Alford supplied my own illustrations. I don't recall the details. ;-)

Yes, "Ten thousand times ten thousand" is a wonderful song, with its own stirring tune proper. I see one other text that uses it, "O God, in whose great purpose", but I feel safe in saying I don't think it's as good as Alford's text.

I'll be out of town and largely away from the Internet for the next six days, so I probably won't be posting much if at all. Look for a deluge of comments in a week or two. This coming Friday through Sunday is the Northwest Regional Esperanto Conference in the San Juans, perhaps we'll sing "Kun roboj brile blankaj" or Alford's other staple text, "Templen post rikolto-fin'", in our service on Sunday morning. After all, Canadian Thanksgiving is already past, it's time for bringing in the sheaves...

Alford wrote more than hymns. His mammoth work on the New Testament is worth taking a look at:

The Greek Testament, by Henry Alford

Do you have any idea how many hymnals i could buy for $129, let alone $399? ;-) Since it's in the public domain, it can and/or should be made available at Gutenberg or Googlebooks or someplace.

Leland aka Haruo
posting unexpectedly from the far northwest

Thanks for stopping by, khendricks.

My blog entries are not very comprehensive, mostly focusing on the hymnic connections of our birthday boys and girls, along with occasional random facts that might catch my attention momentarily. But the links provided do generally point to more information, such as Alford's Wikipedia page, which talks about his other wriings.

I don't know if it's all online, but Google Books does have at least some of Alford's Greek Testament translations. I'm sure the software version comes with more bells and whistles, though.