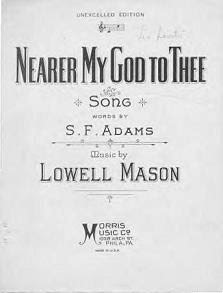 English Unitarian hymnwriter and poet Sarah Flower Adams (February 22, 1805 - August 14, 1848) was born in Essex. Her father, Benjamin Flower, was the editor of the Cambridge Intelligencer, a "journal of weekly events,"and was known as a radical, urging political reform (he was jailed temporarily for referring to a Church of England bishop as an apostate). Sarah's mother, Eliza Gould Flower, who once operated a school for girls, had met Benjamin after first corresponding with him regarding their shared ideals, as expressed in his newspaper.

Followiing the death of both parents, Sarah and her sister Eliza became the wards of William Johnson Fox, a popular Unitarian minister and orator. Fox wanted to produce a hymnal for his London congregation, and both sisters contributed to it. The first edition appeared in 1841, containing thirteen hymn texts by Sarah and more than sixty tunes by Eliza. This text by Sarah, now loved around the world, survived and flourished, though Eliza's tune for it did not.

This tune by Lowell Mason became the most familiar one in the US, printed in many hymnals, and also as sheet music (pictured above). It has been sung at the funerals of several Presidents such as Ford, Garfield, and McKinley (the first lines were reportedly among McKinley's dying words).

Of course, its most enduring historical association is with the sinking of the R.M.S. Titanic in 1912. Several survivors reported that the ship's band continued to play as the lifeboats were launched, and that the last song played was this hymn. At least two film versions of the disaster (1963 and 1997) used Mason's tune, though it seems unlikely that the band (all British) would have played the American tune. Anglican hymnals usually used a tune by John Bacchus Dykes, HORBURY (used in the 1957 British film A Night to Remember) while British Methodists knew Arthur Sullivan's PROPIOR DEO. The band leader, Wallace Hartley, was a Methodist and his family later said that he would have chosen the Sullivan tune (which was used for this hymn at his funeral) but did all the other band members know the same tune? Also, both British and American survivors claimed to have recognized the hymn, so it's impossible to say with any certainty exactly what tune was played. The text is certainly appropriate to the tragedy.
Posted by C.W.S. at Sunday, February 22, 2009

Bethel? Bethany. BETHANY (Mason) to be precise. I'd go with PROPIOR DEO for the Titanic tune. It's also the primary tune (Dio, pli apud vin) in the Esperanto hymnals. But the text precedes BETHANY (Mason) by fifteen years, HORBURY by twenty, and PROPRIOR DEO by more; what if anything was it set to before any of these three tunes came along?

I looked at that several times and it didn't register. Fixed now (but at least I got it right in the tags).

Sarah's sister Eliza (more on her later) wrote the first tune this was sung to, in Fox's Hymns and Anthems, but I don't know if that tune went into any other hymnals (1841 is still a bit early for hymnals with both texts and tunes).

I find a few other tunes in American hymnals (downloaded from Google) before about 1870, when it appears that BETHANY was becoming the most-used. Charles Beecher has one in his brother's Plymouth Collection (1855). Songs of Zion Enlarged (1864) has one by "R." John Hullah has one in his Hymnal (1867) and there are two by R.R. Chope and A. Loder in the Episcopal Book of Common Praise (1867).

And of course, a few more listed at the Cyber Hymnal.