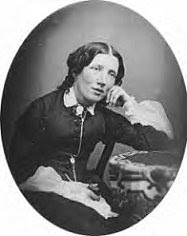 Novelist Harriet Beecher Stowe was born today in 1811, the seventh child (of thirteen) born into a family that would be recognized for their accomplishments in several fields. Her father was Lyman Beecher, a Presbyterian minister known for his often-controversial preaching. A number of her siblings distinguished themselves: Catharine as a leader in women's education, Henry Ward as a Congregational minister even more well known than their father, Edward as a theologian, and Isabella as a prominent activist for women's suffrage. All seven Beecher sons entered the ministry, but that occupation was closed to Harriet and her sisters at the time.

Harriet began writing to support her own family (while raising six children), as her husband, minister and theologian Calvin Stowe was often in poor health. Her first book, The Mayflower (1843) was a collection of stories and sketches.

The issue of slavery was much-discussed among the Beechers; Lyman had come out in favor of emancipation while heading the Lane Theological Seminary in Cincinnati, and several of the siblings worked for the cause in their various fields. Following the passage of the Fugitive Slave Act in 185o which prohibited US citizens from helping escaped slaves, Harriet determined to influence the slavery debate in her own way, writing her first novel, Uncle Tom's Cabin (1852). Though widely misunderstood in the twentieth century, it was hugely popular (at least in the north) and sold millions of copies in its own day, and led to the most famous legend (not proven true) about Mrs. Stowe: that Abraham Lincoln called her "the little woman who wrote the book that started this great war" when they met at the White House in 1862. The book should be understood at least partly as a religious novel, which many modern commentators don't seem to grasp. As a footnote of interest to this blog's readers, Stowe included several references to contemporaneous hymns in Uncle Tom's Cabin.

She wrote several other novels after that, some about slavery but others simply about domestic life in the mid-nineteenth century. This literary work helped to support many members of her extended family, so she felt obligated to continue it. She also wrote much poetry for magazines, and in 1855, contributed three hymns to Henry Ward Beecher's Plymouth Collection of Hymns and Tunes, including this one for today. Stowe was reportedly a habitual early riser, and took the theme of this hymn from the eighteenth verse of Psalm 139: When I awake, I am still with thee.

Still, still with thee, when purple morning breaketh,
When the bird waketh, and the shadows flee;
Fairer than morning, lovelier than daylight,
Dawns the sweet consciousness, I am with thee.

Alone with thee, amid the mystic shadows,
The solemn hush of nature newly born;
Alone with thee in breathless adoration,
In the calm dew and freshness of the morn.

As in the dawning o’er the waveless ocean
The image of the morning star doth rest,
So in the stillness thou beholdest only
Thine image in the waters of my breast.

Still, still with thee, as to each newborn morning,
A fresh and solemn splendor still is given,
So does this blessèd consciousness, awaking,
Breathe each day nearness unto thee and heav'n.

When sinks the soul, subdued by toil, to slumber,
Its closing eye looks up to thee in prayer;
Sweet the repose beneath the wings o’ershad'wing,
But sweeter still to wake and find thee there.

So shall it be at last, in that bright morning,
When the soul waketh and life’s shadows flee;
O in that hour, fairer than daylight dawning,
Shall rise the glorious thought, I am with thee.

Harriet Beecher Stowe, 1855
Tune: CONSOLATION (11.10.11.10.)
Felix Mendelssohn, 1834
Stowe wrote a few other hymns in later years, but this one was her most popular. It was found in a great many hymnals, though usually in only four or five verses. It has now mostly disappeared from modern collections, though I was surprised to find it in the very recent Congregational hymnal, Hymns for a Pilgrim People. However, the hymnal committee for that book was interested in using material from Congregational sources, so this hymn's appearance in Henry Ward Beecher's Plymouth Collection probably helped secure its inclusion.
Harriet Beecher Stowe remains one of my favorite writers for her social conscience and her depictions of nineteenth century life in this country. Some years ago, when I was working on the MCC hymnal project, I read through all of her collected poetry hoping to find something that we could use as a "new" hymn, but without success.
The tune CONSOLATION, nearly always used for this hymn, was adapted from a piano piece by Felix Mendelssohn, one of his Songs Without Words (Book Two, Number Three in E major). While he did not specifically write hymn tunes, several of his melodies have been adapted by others, including one that everyone knows.

I did refrain from blog reading while on vacation but do appreciate your notification of this post of yours about Harriet Beecher Stowe. Yes, she is a favorite writer of mine also and I fully agree that Uncle Tom's Cabin is better understood when seen as a religious novel, at least to some extent.

Thank you for the sensible critique. Me and my neighbor were just preparing to do a little research about this. We grabbed a book from our area library but I think I learned better from this post. I'm very glad to see such excellent information being shared freely out there...