Nativity of John the Baptist 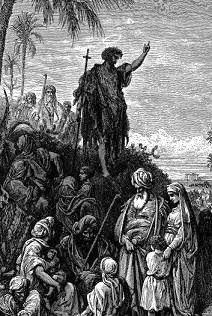 As discussed before, most saints' days mark the day of death or martyrdom. John the Baptist is one of the few whose birth is marked, apparently because he was endowed with "prenatal grace," which made his birth more important than that of other saints.

This prenatal grace derives from his miraculous birth to Mary's cousin Elizabeth, past the age of childbearing, but modern scholarship is skeptical of this claim, as the relationship between Mary and Elizabeth is only mentioned in the Gospel of Luke. The rest of the story seems more secure: John, prophesying the ministry of Jesus (depicted here in a woodcut by Gustave Doré) , baptizing him in the Jordan, and continuing to preach the Word in spite of personal danger. The story of his death has been enlarged over the years by the many tellings of the story of Salome in novels, plays, even operas.

This hymn by Henry Alford enumerates several of the names and attributes given to John in scripture.

Herald, in the wilderness,
Breaking up the road,
Sinking mountains, raising plains,
For the path of God;

Prophet, to the multitudes
Calling to repent,
In the way of righteousness
Unto Israel sent;

Messenger, God’s chosen one
Foremost to proclaim,
Proffered titles passing by,
Pointing to the Lamb.

Captive, for the word of truth
Boldly witnessing;
Then in Herod’s dungeon cave,
Faint and languishing;

Martyr, sacrificed to sin
At that feast of shame;
As his life foreshowed the Word,
In his death the same—

Holy Jesus, when he heard,
Went apart to pray:
Thus may we our lesson take
From this saint today.

This hymn first appeared in Alford's The Year of Praise (1867), one of several nineteenth-century hymnals that prescribed specific hymns for each Sunday of the year and for saints' days and other commemorations. The tune BRUCE is by an unknown composer, but may have first appeared in the Presbyterian Hymnal.

One Year Ago: Henry Ward Beecher

P.S. Tonight, listening to a cable news program, I was surprised to hear both the feast day of Saint John the Baptist's birth and the birthday of Henry Ward Beecher mentioned. I don't expect that to happen very often!

Odd how little we Baptists tend to take note of John the B. ;-)