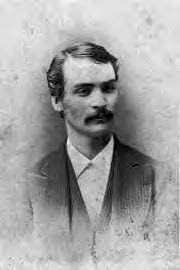 Gospel songwriter Charles H. Gabriel was born in Iowa on August 18, 1856. His father was a farmer and singing school teacher, and Charles received his musical education at home while growing up; when Charles was sixteen his father died, and Charles took his teaching position for the next year. He had been interested in songwriting from an early age, encouraged by his parents.

He left home at seventeen and taught singing for the next several years in various places. His first song was published in 1873, followed by his first songbook, Gabriel's Sabbath School Songs, in 1877. He wrote both sacred and secular songs, as well as band music.

He lived in San Francisco for at least two years, as music director at Grace Methodist Episcopal Church in the Mission District, where he wrote Send the light, his first big success. While he often wrote both words and music for his songs, he also collaborated with many of the popular writers and composers of his time, writing either words or music. A year ago this week we saw one of these collaborations here. He became so prolific that, like Fanny Crosby, his publishers apparently asked him to adopt pseudonyms for some of his songs so that their books would not appear to have so many Charles Gabriel pieces.

I chose one of his texts to feature today because we have had an abundance of composers over the last week or so; also, this is a communion text, which is not a very common theme for gospel songs. In modern times we don't usually use frequent quotation marks like this, though they were more prevalent a hundred years ago to indicate phrases in a hymn or song which were taken from the Bible. "Whosoever will" is probably from the verse "For whosoever will save his life shall lose it: but whosoever will lose his life for my sake, the same shall save it." which essentially appears three times: in Matthew 16:25, Mark 8:35, and Luke 8:24. "All things are ready" is from Matthew 22:4. When first published, this text was credited to "Charlotte G. Homer," one of Gabriel's pseudonyms.

“All things are ready,” come to the feast!
Come, for the table now is spread;
Ye hungry souls, ye weary, come,
And you shall be richly fed.

“All things are ready,” come to the feast!
Come, for the door is open wide;
A place of honor is reserved
For you at the Savior’s side.
Refrain

“All things are ready,” come to the feast!
Leave ev’ry care and worldly strife;
Come, feast upon the love of God,
And drink everlasting life.
Refrain

Gabriel's music was further popularized by the evangelist Billy Sunday, who used many of his songs in his campaigns (Homer Rodeheaver, whose publishing company brought out most of Gabriel's work after 1912, was also Sunday's music director).

Before his death in 1932 Charles Gabriel eventually published more than 75 collections of music: for Sunday schools, evangelical meetings, men's voices, women's voices, choir anthems, piano and organ pieces, and military bands. He wrote cantatas for both chldren and adults, musical instruction manuals, and many popular songs (the illustration below was an advertisement for his secular music). The estimate of his total number of gospel songs (presumably including the tunes he wrote for texts by others) goes as high as eight thousand, comparable to Fanny Crosby's output. Several of his songs are still known and sung today. 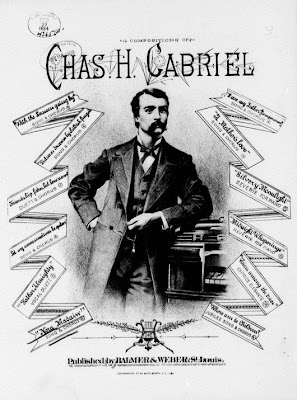 How interesting that you call this a communion text! I grew up singing this song and can't ever recall it being sung in connection with having communion. So, in what context do I remember it? I'd say more the idea of looking ahead to the banquet of heaven - or maybe an invitation to the Christian life. I suppose it wasn't "sombre" enough for communion... (an idea that needs to be shaken up from time to time, IMO! But then that's another blog altogether.)

Well, since this song was running through my head all morning, I decided to look it up. I found an additional verse which comes between your second and third.

"All things are ready," come to the feast!
Come, while He waits to welcome thee;
Delay not while this day is thine,
Tomorrow may never be.

In both my copies, the words are still credited to "Charlotte G. Homer". I can understand this in the older hymnal (pub. 1931) but the newer one is copyright 1974. It is "New 'Waves of Glory': Turn of the Century Favorites for 20th Century Evangelism". The songs included have obviously been re-type set, ie., not just copied from their original plates. Interesting.... !

I've never seen nor heard this hymn before (I say that quite often, don't I?) but it did strike me as quite "bouncy" for a communion hymn. But I thought, "Why not? It does have a celebratory aspect to it."

Then reading your additional verse to it confirmed for me the aspect of it as a "gospel hymn," certainly a call to the Christian life.

What a thought provoking post...and comments! Thank you both, C.W.S. and AuntE!

Well, use counts for a lot, and I never have sung this before. But if it had come before our committee all those years ago, we probably would have classified it as a communion hymn anyway (and yes, it's a rather peppy melody, but why not? -- that's what made it stand out to me). There are a number of communion hymns which do give us a "foretaste" of the feast to come, without specifically dwelling on the earthly ritual.

As to why this was still credited to "Charlotte Homer" in 1974, there's no definitive answer; I think that some of those old pseudonyms have just stuck, not only for Gabriel but also for Fanny Crosby, Eliza Hewitt, and others who used them. Modern scholarship "knows" the real authors, but there are hymnals which give you more historical information or context either in the indexes or in a separate companion volume, and hymnals which just present the words and music as they have come down to us with no attempt to elaborate on them.

This hymn has been running through my mind all day, but it's not in any of the hymnals I have. I was very happy to find it on your site! Don't know how I learned it, but I have always loved the invitation to "come to the feast" and have thought of it in connection with the Lord's Supper. What a beautiful word picture of communion: "Ye hungry souls, ye weary come, and you shall be richly fed."

I think the "whosoever will" reference could also be to Revelation 22:17, "And whosoever will, let him take of the water of life freely."