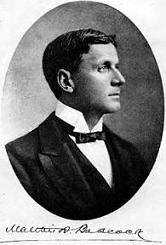 Maltbie Davenport Babcock (August 3, 1858 - May 18, 1901) was a popular Presbyterian minister. Born in Syracuse, NY, he graduated from Syracuse University and Auburn Theological Seminary. Following his graduation in 1882, he became the pastor of the First Presbyterian Church of Lockport, NY (where they still remember him on their website). From 1887 to 1900 he was senior minister at Brown Memorial Presbyterian Church in Baltimore. During this period he became renowned for his preaching and his commitment to social issues.

He was called to lead the prestigious Brick Presbyterian Church in New York City in 1900, where he succeeded Henry Van Dyke. Unfortunately, his tenure there was short; he became ill during a Mediterranean cruise and died in Naples.

Following his death, his wife Katherine published a collection of his poems with excerpts from his sermons, articles, and letters called Thoughts for Everyday Living (1902). Some of the poems were then set to music in various hymnals, including this one.

As e'er the sun sinks to its rest,
Its golden glories thrilling me,
And voiceless longings stir my breast,
Then teach me, God, to worship thee.

And when the stars — the daylight fled —
In serried, shining ranks I see,
Filling the splendid vault o’erhead,
Then teach me, God, to worship thee.

Or if in solemn forest shades
The calm of nature steals o’er me,
And silence all my soul pervades,
Then teach me, God, to worship thee.

Not in the sacred shrines alone,
Which chime their summons unto me,
Would I look upward to thy throne,
But everywhere would worship thee.

Like many of his poems, this one shows Babcock's love of nature; his wife recalled the long walks he would take along Lake Ontario when they lived in Lockport. His most famous hymn, This is my Father's world, excerpted from a longer poem, also sings the praises of God in nature.

One Year Ago: Where cross the crowded ways of life

CWS, when you list the tune name under the words of hymns here, is the tune a commonly used one for these words? Is it one you have seen used with these particular words? Just wondering ...

It varies. There aren't really a lot of "rules" for coupling of hymns and tunes. Some combinations are fairly well established, but most are not, and vary widely from denomination to denomination, and from country to country. A tune that "always" goes with a particular text in the US may rarely or never be used with that text in the UK (or Canada, I'd imagine).

So even when I'm presenting "familiar" hymns here, the tune may not be one that everyone agrees on. Sometimes it's a combination that I've seen in the dozens (if not more) of hymnals I've perused, but sometimes it's a new combination that I think works well. On occasion I've presented more than one tune possibility. Congregations need to sing a variety of familiar and unfamiliar tunes.

Remember, too, that I'm sometimes presenting texts that have more or less vanished from contemporary worship, and thus have no "commonly used" tune. My interest is in forgotten tunes or composers as well as forgotten texts and writers. I'm curious to know what sparked your question.

Well, I guess my question started from the point of never (to my recollection) having heard GERMANY with any other words than "Where cross...". That led me to wonder if "As e'er the sun..." was coupled with that tune in whatever hymnal you found it. And then there's just my basic curiosity about hymn words and tunes in general.

As you and I both know, not all LM tunes would "work" with these words. There are times when I've tried probably half a dozen tunes to find one that feels right, or even okay compared with others that are just downright unsuitable, IMO. I will change the tune from what is in the hymnal if the words are particularly well-suited to the service, but the tune is completely unfamiliar to the congregation and we are already singing another hymn that week that is less than well known. I try not to swamp the congregation with too many new things in the same week. However, I am not always successful! About 2 weeks ago I chose THAXTED ("O God beyond all praising") - I thought people knew it; I was wrong! Then later in the service, we sang "In Christ Alone" which I knew was not familiar. Fortunately, that doesn't happen all too often.

Wow, I am hugely embarrassed right now. Somehow, I mixed up the tunes in my head for this hymn, and I didn't really intend GERMANY at all, but ROCKINGHAM (it's fixed now). I might have mixed them up because of another evening hymn, Again, as evening's shadow falls, which does go well with GERMANY, unlike Maltbie Babcock's text.

At any rate, GERMANY (which is sometimes called by a few other names) was published long before Where cross the crowded ways of life so it has been used with a number of texts over the years (CyberHymnal lists 17, none of which I would particularly associate with it).

Oh, and while I do think it's good for a congregation to sing unfamilar tunes, I agree that there shouldn't be too many in one week!

ROCKINGHAM is a lovely tune and suits these words very well, I think. I also like Rockingham for "When I survey the wondrous cross".