Henry Alford (October 7, 1810 - January 12, 1871), Anglican priest and eventually dean of Canterbury Cathedral, published fifty-eight books in his lifetime, including poetry collections, a popular book on English grammar, translations (Homer's Odyssey among them), selected sermons, two hymnals, and the four-volume New Testament in Greek, an influential translation and commentary which is still used today. The New Testament work had occupied him for twenty years, and though he began a similar effort on the Old Testament, poor health toward the end of his life forced him to abandon it.

His interest in hymnody began quite early, while away at school he
began writing hymns, and in 1821 he produced A Collection of Hymns for Sundry Occasions (at age 11!). The final verse of one of them reads as follows:

Just as a schoolboy longing for his home,
Leaps forth for gladness when the hour is come;
So true believers, eager for the skies,
Released by death, on wings of triumph rise.

Today's hymn, on a similar theme, was written only seven years later, while he was at Cambridge, but Alford still thought enough of it to include it in his two later hymnals published in 1844 and 1867.

Forth to the land of promise bound,
Our desert path we tread;
God's fiery pillar for our guide
And Jesus at our head.

E'en now we faintly trace the hills,
And catch their distant blue;
The golden city's gleaming spires
Rise dimly on our view.

Soon, when the desert shall be crossed,
The flood of death past o'er,
Our pilgrim hosts shall safely land
On Canaan's peaceful shore.

There love shall have its perfect work,
And prayer be lost in praise;
And all the people of our God
Their endless anthems raise.

In 1866, Alford became the first editor of the new magazine Contemporary Review, which is still published today. In March of that year, he wrote an article which criticized “at considerable length” nine of the most popular hymnals of the day. It was probably no coincidence that he was at the same time preparing a new hymnal himself, The Year of Praise, which was intended to introduce congregational hymn singing to Canterbury Cathedral. It was first used at the cathedral on December 2, 1867, and Alford then wrote to one of his daughters:

After Alford's death in 1871, his wife, Frances Oke Alford, edited The Life, Journals, and Letters of Henry Alford D.D., Late Dean of Canterbury. The illustration of his library at Canterbury below is taken from that book. 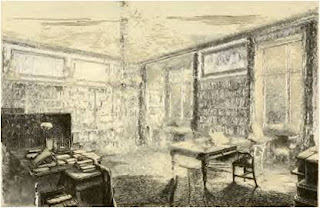 One Year Ago: Henry Alford