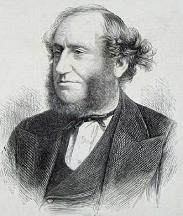 Composer and organist George Job Elvey was born today in 1816. He was a boy chorister at Canterbury Cathedral, going on to study at the Royal College of Music. At seventeen he took his first post as an organist, serving at a few parishes until 1835, when he was appointed to serve at St. George's Chapel in Windsor Castle, where he remained for nearly fifty years as organist and choirmaster. Several other future organists and composers were his students at St. George's, including C.H.H. Parry.
As organist at St. George's he also held the official post of Organist to the Queen. In this capacity he came into contact with various members of the British royal family, even teaching composition to the Queen's consort, Prince Albert (who later wrote a few hymn tunes himself). Many of Elvey's sacred choral works were composed for royal occasions such as weddings or funerals, and he was knighted in 1871 following his Festival March for the wedding of Princess Louise. (As a letter-writer to the Musical Times noted some years later, his knighthood came at the age of fifty-five, coincidentally LV in Roman numerals)
He was a great admirer of Handel, even naming his youngest son (born after he was sixty) George Frederick Handel Elvey. His choirs often sang Handel's anthems and choruses, and he also conducted the oratorios at large festivals, his last being a performance of Messiah less than a year before his death in 1893.
Elvey's own works included nearly fifty anthems, two oratorios, numerous settings of service music and Anglican chant, and, of course, several hymn tunes. His oratorio Mount Carmel was followed very soon after by Mendelssohn's Elijah, dealing largely with the same Biblical story. Elvey acknowledged the superiority of the latter, and Mount Carmel was never published, though portions of it continued to be performed at St. George's and elsewhere. His other oratorio, The Resurrection and Ascension, was more popular in its day, though unknown in our time.
Elvey is remembered today primarily for some of his chant settings and two very popular hymn tunes which we have already seen: DIADEMATA (here and here) and ST. GEORGE'S WINDSOR. This tune also remains in a few hymnals, though far fewer than the other two.
Strong Son of God, Immortal Love,
Whom we, that have not seen thy face,
By faith, and faith alone, embrace,
Believing where we cannot prove.

Our little systems have their day;
They have their day and cease to be;
They are but broken lights of thee,
And thou, O Christ, art more than they.

We have but faith: we cannot know;
For knowledge is of things we see;
And yet we trust it comes from thee,
A beam in darkness: let it grow.

Let knowledge grow from more to more,
But more of reverence in us dwell;
That mind and soul, according well,
May make one music as before.

Alfred, Lord Tennyson, 1850
Tune: ST. CRISPIN (L.M.)
George J. Elvey, 1863
Elvey wrote this tune for Charlotte Elliot's Just as I am, without one plea which we saw last week, in A Selection of Psalm and Hymn Tunes (1863) which was compiled by one of his former students, E.H. Thorne. It was sung at Elvey's funeral following his death on December 9, 1893.
Elvey's fourth wife, Mary, (he outlived the other three) wrote a memoir, Life and Reminiscences of George J. Elvey (1894). It's a little confusing because she referred to all the other wives (and herself) simply as "Mrs. Elvey," so you read more than once about Mrs. Elvey's death(s). Also, for some reason, she did not include his hymn tunes in the listing of his compositions, so it's hard to tell just how many there are, though I have definitely found more than are listed at the Cyber Hymnal site. Perhaps this excerpt from a letter he wrote, reproduced from the memoir, gives a little sense of Elvey's personality.
I have been asked to arrange my anthem "Praise the Lord" for instruments, for a choir festival at Brecon, and among the list of instruments I am to write for is the euphonium. I have not the least idea what sort of instrument it is, but it is, I believe, used in military bands. What I want to know is, whether it plays tenor or bass parts, and also, whether I must write for it in the proper key, or whether transposition is necessary, and, if so, what key I ought to put the instrument in? I do not intend to transpose the whole of my anthem for the convenience of Mr Euphonium; so, if he cannot play like a good Christian in D, I shall dispense with his services.
One Year Ago: George Matheson
Another Birthday Today: Emma Ashford