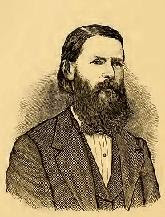 The Reverend Robert Lowry was born today in Philadelphia in 1826. His parents were Presbyterians, but at age eighteen he joined a Baptist church, and following his 1854 graduation from the University at Lewisburg (now Bucknell University) he was ordained as a Baptist minister, going on to lead churches in Pennsylvania, New Jersey and New York over the rest of his life.
He was interested in music from an early age, but as a pastor he became interested in the use of music in the church, especially the Sunday school music that was becoming popular in the mid-nineteenth century (the precursor to gospel songs as we know them). He began to write and compose his own songs, which soon became quite successful. Often he wrote both words and music, such as Shall we gather at the river, probably his most popular song, but sometimes he wrote the tune only, or in the case of Marching to Zion, adapted an older text (by Isaac Watts, in this case) into a gospel song by adding a refrain and a compelling melody.
Following the 1868 death of William B. Bradbury, who had been the leading proponent of Sunday school music development, his publishing company hired Lowry to replace him as editor. At first, Lowry was not sure he was qualified, but he undertook more musical study and eventually edited or co-edited (often with William Howard Doane) more than twenty song collections. His own body of work expanded greatly; he continued to write songs of his own and tunes in collaboration with most of the well-known text writers of the day. The company, now known as Biglow & Main, solidified its position as the most successful publisher of Sunday school music and gospel songs for the rest of the nineteenth century.
Looking though his songs for something to present today I came upon this one, for which he originally wrote both words and music for the collection Royal Diadem for the Sunday School (1873). Since Lowry's tune is not available as a sound file, I've matched the text to this older hymn tune which suits it well.
My soul shall rest in hope
Rejoicing in your love
Who, in my sorrow, gives me joy
And lifts my soul above.

My soul shall rest in hope
And live in faith divine,
Supremely blessed, which I can feel,
Your saving love is mine.

My soul shall rest in hope,
Though mortal strength may fail,
Your gentle hand that leads me now
Will guide me through the vale.

My soul shall rest in hope
Until you bid me rise
To see your face and sing your praise
Beyond the earthly skies.

My soul shall rest in hope
Rejoicing in your love
Who, in my sorrow, gives me joy
And lifts my soul above.

Robert Lowry, 1873; alt.
Tune: CAMBRIDGE (S.M.)
Ralph Harrison, 1784
arr. Samuel Sebastian Wesley, 1872
In researching Lowry for this entry, I came upon the following, which I hope you will enjoy. Apparently Shall we gather by the river so impressed Canadian Dr. D. Morrison of Ontario that he translated it into Latin (for what purpose I can only imagine). The first stanza, all that I could unearth, goes like this:
Fluvione colligemus
Qua'sint seraphim sancti,
Fluvio amœna cujus
Fons est throno Domini?
Two Years Ago: Gregory the Great
One Year Ago: Paul Gerhardt

What lovely words of comfort!