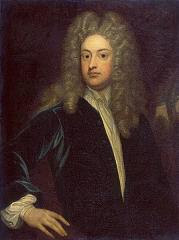 Joseph Addison, born today in 1672, was better known as a playwright, journalist, and politician, but he also wrote some religious poetry that was later sung as hymns, a few lasting until the present day.

His father, Lancelot, a member of the clergy, became Dean of Lichfield Cathedral, and Joseph grew up there. Apparently with no intention of following his father into the clergy, he became a classics scholar at Oxford, studying and translating Latin poets, and writing about earlier English poets. His own poetic efforts also began in college.

In 1704 he was commissioned to write a poem about the Battle of Blenheim; the resulting poem was sufficiently well-regarded as to lead to his appointment to a government post. He continued to advance in government, and was a member of the Irish House of Commons from 1708 until his death in 1719.

During his time in government he continued to write poetry and contribute to journals of the day. He was interested in the theatre, first writing the libretto to Rosamund, an opera which was not produced in his lifetime, and then other more successful plays. His play Cato, a Tragedy (1712) is interesting in that it was also popular in the American colonies for many years, and appears to have been known to several important figures in the American Revolution.

Addison and his friend Richard Steele founded a newspaper called The Spectator in 1711. Amid his various articles for this paper, much of his religious poetry also appeared, including the verses we now know as hymns. One of my own Top Ten hymns is by Addison; The spacious firmament on high was first published in The Spectator on August 23, 1712. We were just talking about the many paraphrases of Psalm 23; Addison's Spectator version appeared a month earlier on July 26: The Lord my pasture shall prepare. In between these two we find today's hymn, from The Spectator of August 9, 1712, the one by Addison that has probably appeared in the most hymnals, even up to the present.

When all thy mercies, O my God,
My rising soul surveys,
Transported by the view, I’m lost
In wonder, love and praise.

Unnumbered comforts to my soul
Thy tender care bestowed,
Before my infant heart conceived
From whom those comforts flowed.

When worn with sickness, oft hast thou
With health renewed my face;
And, when in sins and sorrows sunk,
Revived my soul with grace.

Thy bounteous hand with worldly bliss
Hath made my cup run o’er;
And, in a kind and faithful Friend,
Hath doubled all my store.

O how shall words with equal warmth
The gratitude declare,
That glows within my ravished heart?
But thou canst read it there.

When nature fails, and day and night
Divide thy works no more,
My ever grateful heart, O God,
Thy mercy shall adore.

Through all eternity to thee
A joyful song I’ll raise;
For, oh, eternity’s too short
To utter all thy praise!

Addison wrote thirteen stanzas in all, though most modern hymnals only print four or so, so many would consider even these seven here to be excessive. I'd guess that the first and last stanzas are the most familiar, and different editors choose different ones in between from the eleven remaining. Several different tunes have also been used, including TALLIS' ORDINAL, CONTEMPLATION, and BANGOR (which I also like).

Addison's first stanza concludes with “lost, in wonder, love and praise.” I think it's no accident that Charles Wesley's great hymn Love divine, all loves excelling (also one of my Top Ten), written in 1747, concludes its final stanza with that exact phrase. Wesley was assuming his audience was familiar with John Dryden's ode to England Fairest isle, all isles excelling, and probably with Addison's poem as well.

P.S. The portrait of Addison is by Sir Godfrey Kneller, a German artist (originally Gottfried Kniller) who moved to England in 1674 and eventually became Principal Painter to the Crown, preserving the likenesses of many notable Britons of the late seventeenth and early eighteenth centuries.

One Year Ago: Saint Philip and Saint James

I've heard this sung to RESIGNATION with 2 verses of text per one verse of tune.

Hmmm - this is interesting! I just went to Cyberhymnal to make sure I had the correct tune name. The one they call Resignation I have never heard before. I've come across this before - a tune with 2 names (often the difference between N. America and the UK) and/or the name not fitting the tune I had in mind.

In any case, the tune I meant was the one sometimes used for "My Shepherd Will Supply My Need".