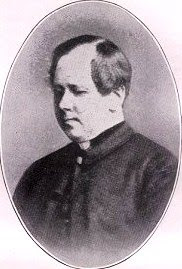 The full title of Sir Henry Williams Baker (May 27, 1821 - February 12, 1877) was actually Third Baronet Baker, of Dunstable House, in Richmond, Surrey. Some sources say he was born in the county of Surrey, some say in London. A few years after his 1844 ordination in the Church of England he became the vicar of Monkland Priory church in Herefordshire, a county not particularly near the seat of his baronetcy, which seems not to have been a problem. He remained in the Herefordshire position until his death.

In addition to being a vicar and a baronet, of course, he was the prime mover behind the immensely successful and influential Hymns Ancient and Modern, first published in 1861, as discussed last year. This hymn by Baker, short and to the point, first appeared in that initial edition.

O praise our God today,
God's constant mercy bless,
Whose love has helped us on our way,
And granted us success.

O happiest work below,
Mirror of joy above,
To sweeten many a cup of woe
By deeds of holy love!