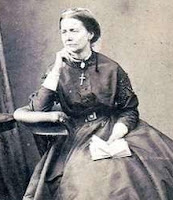 Today is the anniversary of the death of Irish poet Cecil Frances Alexander, who died in 1895. The date of her birth in 1818 is still unknown. She was born in Dublin to Elizabeth and John Humphreys, and began writing verse at an early age.

Two of her earliest collections contain poetry that was later taken up by hymnal editors: Verses for Holy Seasons (1848) and Hymns for Little Children (1848). The latter collection was edited by the esteemed hymn writer John Keble, and went through sixty-nine editions before the end of the nineteenth century.

In 1856, her poem "The Burial of Moses" appeared in the Dublin University Magazine (anonymously, for some reason). Alfred, Lord Tennyson declared that it was the only poem that he had read by a living author that he wished he had written himself.

She married the Reverend William Alexander in 1850. She was six years older than he, which was said to cause "great family concern," so the year of her birth was "adjusted," and many older sources claimed that she was born in 1823.  William became Bishop of Derry and Raphoe in 1867, and Archbishop of All Ireland in 1896 (after his wife's death).

Alexander's hymns still appear in modern hymnals, though most of the ones we still know were originally written for children (All things bright and beautiful, Once in royal David's city, There is a green hill far away). Today's hymn, for adults, originally appeared in Hymns (1852), published by the Society for the Propagation of Christian Knowledge, an organization that was largely responsible for sending Church of England missionaries to the American colonies in the eighteenth century, and remains active today as a publishing house.

Spirit of God, that moved of old
Upon the waters' threat'ning face,
Come, when our weary hearts are cold,
And stir them with an inward grace.

For you are power and peace combined,
All highest strength, all purest love,
The rushing of the mighty wind,
The brooding of the gentle dove.

Come, give us still your pow'rful aid,
And urge us to that higher place;
Nor leave the hearts that once were made
Fit temples for your quick'ning grace.

Nor let us quench your sev’nfold light;
But still with softest breathings stir
Our wand'ring souls, and lead us right,
O Holy Ghost, the Comforter.

The score for the folk tune TRUTH FROM ABOVE, can be seen here, which may help you to better match the text with the tune, which I believe is a good combination.

English composer Ralph Vaughan Williams (1872 - 1957), the arranger of this tune, was also born today, which also makes the match appropriate (to my mind, at least).  Originally sung with the carol of the same name, Vaughan Williams published his version in his Eight Traditional Christmas Carols (1919) and he had previously used the melody in his Fantasia on Christmas Carols (1912).

The memorial window to Mrs. Alexander below, at St. Columb's Cathedral in Derry, was dedicated in 1913. The left window represents Once in royal David's city, the center window, There is a green hill far away, and the right window, The golden gates are lifted up. 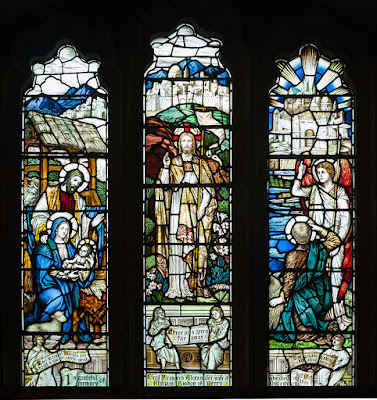 (Photograph of the window is attributed to Andreas Franz Borchert)