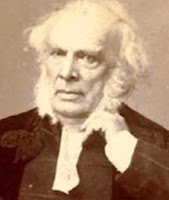 Scottish poet Horatius Bonar (1808-1889) presents us with a bit of a paradox - a clerical hymnwriter whose hymns could not be sung in his own church. It was not until six years ago, in 2010, that the Free Church of Scotland (of which Bonar was a founding member) allowed the singing of hymns. The web site of that denomination today gives a "comprehensive list of recommended hymns," and fortunately some of Bonar's many hymn texts are included.

Bonar was one of eleven children, born into an Edinburgh family which can boast of more than three hundred years of service to the church. In 1837 he took on his first pastorate in the Church of Scotland, at the North Church in Kelso. Over the next few years he became widely known for his evangelical writings, published in tracts and devotional books. He joined the Great Disruption in 1843 and he and his church became affiliated with the new Free Church of Scotland, separating from the state religion. He was for several years the joint editor of the Free Church's newspaper The Border Watch.

Like his Irish contemporary, Cecil Frances Alexander, his earliest hymns were written for children, but his themes became much broader. His hymns eventually numbered close to six hundred, and while some critics felt that he wrote "too many," and that some of them were written carelessly and clumsily, about a hundred of them passed into common use across many denominations in the nineteenth and early twentieth centuries.

Come, mighty Spirit, penetrate
This heart and soul of mine;
And my whole being with your grace
Infuse, O Life divine.

As this clear air surrounds the earth,
Your grace around me roll;
As the bright light pervades the air,
So pierce and fill my soul.

As from these clouds drops down in love
The precious summer rain,
So from yourself pour down the flood
That freshens all again.

Thus life within our weary hearts
Shall make its glad abode;
And we shall shine in beauteous light,
Filled with the light of God.