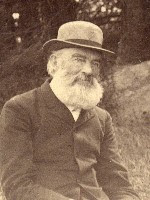 Samuel Longfellow (1819 - 1892), a Unitarian pastor, hymnwriter, and hymnal editor was born today in Portland, Maine, and lived most of his life in New England.  He is probably best known for two Unitarian hymnals he edited with his close friend Samuel Johnson: A Book of Hymns for Public and Private Devotion (1844) and Hymns of the Spirit (1864). Both of these collections include several texts by Longfellow and Johnson, as well as poets whose verse had not previously been sung (such as John Greenleaf Whittier) or had not previously appeared in an American collection (such as Nearer, my God, to thee) Most of the material was edited to make it conform to Unitarian belief.

Longfellow and Johnson met as students at Harvard Divinity School and remained friends for the rest of their lives, carrying on a long and affectionate correspondence. When Johnson died in 1882. Longfellow spent the next year writing a memoir of his friend. A biographer of Longfellow's would later describe his friendship with Johnson as the most significant relationship of his life. The exact nature of the relationship remains unclear, but it's possible that Longfellow was thinking about it in a rather sad poem called "Love" (1851), which concludes:
To love, nor ask return,
To accept our solitude,
Not now for others' love to yearn
But only for their good;
To joy if they are crowned,
Though thorns our head entwine,
And in the thought of blessing them
All thought of self resign.
Is this the lament of a man who has decided that his feelings will never be returned in the way he wants? We will probably never know for sure.
Today's hymn was written toward the end of Longfellow's life, just a few years before the photograph above (from 1890), and on the occasion of the dedication of the new Cambridge Hospital, in the Massachusetts town where he was then living, and working on a three-volume biography of his brother, the poet Henry Wadsworth Longfellow.

O Lord of life, our saving Health,
Who mak’st thy suffering ones our care;
Our gifts are still our truest wealth,
To serve thee our sincerest prayer.

As on the river’s rising tide
Flow strength and coolness from the sea,
So through the ways our hands provide,
May quickening life flow in from thee;

To heal the wound, to still the pain,
And strength to failing pulses bring,
Till stumbling feet shall leap again,
And silent lips with gladness sing.

Bless thou the gifts our hands have brought!
Bless thou the work our hearts have planned,
Ours is the hope, the will, the thought;
The rest, O God, is in thy hand.

The final stanza here has often been taken out of this hymn and used separately in many hymnals as an offertory response, but that actually changes its meaning. In that usage, the text is consecrating the offerings of the people for the work of the church.  However, the complete hymn has a different theme and meaning: that we can be healers through the gifts of God, flowing though us. This idea feels quite modern, even though the language is archaic.