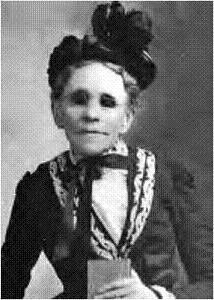 More than eight thousand gospel songs are reputed to have come from the pen of Frances Jane Crosby, born today in 1820. Some estimates go even higher, though you can only see about five hundred listed at the Cyber Hymnal (fewer than ten percent of them!). Blinded as a child of six weeks by poor medical care, Crosby later entered the New York Institution for the Blind (still operating as the New York Institute for Special Education) in the Bronx. She was a student there for several years and later returned as a teacher of English and history.

She began writing poetry at the age of eight, and her first collection, The Blind Girl and Other Poems was published in 1844. The year before, she had traveled with a group from the school to Washington DC to lobby for better educational funding for the blind. While there, she became the first woman to speak on the floor of the US Congress when she read one of her poems (a tribute to the late Secretary of State Hugh Legare) before a joint session. She would return to Washington several times after that, visiting Presidents and other politicians. (Grover Cleveland had once been employed at the New York Institution for the Blind when Crosby was there.)

She published a few more collections of poetry, and in time began to write secular songs. Working with composer George Root she wrote The Flower Queen (1852), said to be the first American cantata. She collaborated with Root on several more songs which were very successful.

In 1863, William B. Bradbury asked her to write a hymn for a collection he was editing. There's a cry from Macedonia was published with music by Bradbury, and neither of them could have foreseen the career that was born. Before long nearly every new gospel songbook and Sunday School collection would include several texts by Fanny Crosby, with music by all the prominent composers of the time. She worked for many years for the publisher Biglow & Main, and would go to their offices to sit and write several texts each day. Eventually she began to write under pseudonyms (nearly 200 have been identified) because publishers didn't want their books to include so many songs by the same author.

She was an accomplished musician, and even wrote the music for a handful of her songs. In 1858 she married Alexander Van Alstyne, another blind musician who taught at the Institution. They were married for more than forty years, though they did not always live together. Fanny was often traveling around the country, lecturing, meeting with her fellow songwriters and composers, and doing various works of charity. She rarely received much remuneration for her hymns and songs, and what she got she usually gave away. By agreement with her husband she continued to be published as Fanny Crosby, the name by which she was best known, though some older hymnals credit her as Mrs. Van Alstyne for propriety's sake.

Several of her songs have already appeared here on the blog (click on the Crosby tag below), some of the most popular as well as more obscure ones. This one falls in the "more obscure" category but I found it interesting and somewhat different from many of her others. It first appeared in the Biglow & Main collection Brightest and Best (1875), and is adapted from the first chapter of the book of Ruth. The Song of Ruth is a ancient poem of fidelity, part of a long progression of Biblical songs proclaimed by both women and men.

Entreat me not to leave thee,
My heart goes with thee now;
Why turn my footsteps homeward?
No friend so dear as thou!
Thy heart has borne my sorrow,
And I have wept for thine;
And now how can I leave thee?
Oh, let thy lot be mine.

I’ll follow where thou leadest;
My love will cling to thee;
And where thy head is pillowed,
My nightly rest shall be;
Thy birthplace and thy kindred
I’ll cherish like my own;
Thy God shall be my refuge,
I’ll worship at God's throne.
Refrain

Where death’s cold hand shall find thee,
There let my eyelids close,
And, in the grave beside thee,
This mortal frame repose:
Oh, do not now entreat me;
No friend so dear as thou;
My heart would break in anguish
If I should leave thee now.
Refrain

I'm not sure if this song ever appeared in any other hymnals or songbooks, but given the tremendous number of texts by Fanny Crosby, editors always had new ones to consider. So it's not surprising that many interesting ones were set aside in favor of the most popular ones -- even those would be enough to fill a book or two. Similarly, her later songs, those written in the twentieth century, are also little-known.

Fanny published an autobiography in 1906, Memories of Eighty Years, which is almost as interesting for what she leaves out as for what she includes (for example, her marriage is covered in two paragraphs). She continued her work of songwriting and charity up until her death in 1915. For the last several years of her life she had lived in Bridgeport, CT, and her funeral there was the largest that city had seen, larger than that of P.T.Barnum, they said. Only a small stone reading "Aunt Fanny" and "She hath done what she could."originally marked her gravesite, but in 1955 the city erected a larger monument there with the words of Blessed assurance, Jesus is mine inscribed.
Posted by C.W.S. at Tuesday, March 24, 2009

Is there another biography that conveys a fuller picture of Fanny Crosby's life that you could recommend, C.W.S.? Or anyone? It would be interesting me to read a more complete account first and then her autobiography.

The one that looks iinteresting to me is (I believe) the most recent one, published in 2005: Her Heart Can See by Edith Blumhofer. Part of it is available online on Google Books but I'm thinking about tracking the book down myself.

You write, "She was an accomplished musician, and even wrote the music for a handful of her songs." There is a tune attributed to her in one of the Japanese Protestant hymnals, tune-named CROSBY, with an original Japanese text set to it; I've often wondered and haven't been able to determine (a) whether it's really one of her compositions, and if so (b) what English text it was written for.

I've made a MIDI file of the tune, as well as a PDF of the score that also gives the first verse (romanized) of each of the texts. Any information about the origin of the tune and the text with which it was first associated will be most gratefully received.

I don't recognize it offhand; it's not one of the two tunes I've seen.

One is on pg. 198 of her autobiography, and the other was on a website dedicated to women hymnwriters I found a few years ago that doesn't seem to exist anymore.

But given the vast amount of her material (even though there is a large proportion of her texts that were unpublished and never had tunes written for them) it would be hard to say definitively that it wasn't hers.

Thanks for sharing this lovely hymn based on the book of Ruth! I'm a longtime fan of Fanny's. As you pointed out at the Jesus in Love Blog, it goes well with the painting of Ruth and Naomi posted at the following link:

Masato Sakurai at the Mudcat Café appears to have identified a source for the tune the Japanese hymnal calls "CROSBY", here.

It is useful to try everything in practice anyway and I like that here it's always possible to find something new. :)

I enjoy reading this kind of stuff. Thanks for sharing good knowledge