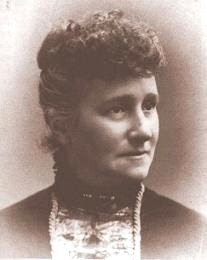 Composer Phoebe Knapp was born in New York City on March 9, 1839. Her mother, the evangelist (and hymnwriter) Phoebe Worrall Palmer made sure that young Phoebe and her sister Sarah were brought up in a strict (if unconventional) Methodist home.

At sixteen, Phoebe married Joseph Knapp, a successful businessman seven years older, and moved to Brooklyn. His lithography firm first made him a millionnaire, after that he was one of the founders of the Metropolitan Life Insurance company. The Knapps became popular members of Brooklyn society and were very involved in Methodist causes and charities. Phoebe played the organ at St. John's Methodist Church, near their Brooklyn mansion, where the Knapps hosted four US Presidents, Methodist bishops, and New York elites. These gatherings, gaining the reputation of a sort of salon, were somewhat different from the evangelical ones for which her mother was known.

Phoebe's musical interests always included composing, and she wrote tunes for several of her mother's hymns. Phoebe the mother edited a monthly magazine, the Guide to Holiness, which included a new hymn in each issue and many of the tunes were by daughter Knapp. She went on to compose for many of the most well-known gospel song writers of the day. Fanny Crosby was a dear friend, and the two women often worked together in the elaborate music room that Joseph Knapp had built for his wife.

Blessed assurance, Jesus is mine will always be their most popular song. This is another Phoebe & Fanny collaboration which also happens to be appropriate for Lent.

Phoebe is supposed to have composed around five hundred tunes for gospel songs, some parlor music, and Prince of Peace, a cantata. She also edited two collections of songs for Sunday schools, with the first one, Notes of Joy for the Sabbath-school (1869), containing one hundred of her own pieces. A Woman of the Century (1893), a collection of biographical sketches by Frances W. Willard, proclaims of Knapp "She writes music, not as a profession, but as an inspiration." However, business-minded husband Joseph made sure that all her music was copyrighted.

I've located only sixteen of her tunes thus far, though that's twice as many as you can see at the Cyber Hymnal site linked above. Still looking for more!
Posted by C.W.S. at Monday, March 09, 2009

Great! I've never heard that one before, and I like it. We sang "Near the Cross" both morning and evening last Sunday (and I sang it in Swahili both times; I've been scarce here for a couple weeks partly because I've had a horrifically severe cold, which has finally begun to lighten up the last three or four days, and partly because I got a Swahili hymnal, Nyimbo za Imani Yetu, in the mail and have been engrossed in it. I refuse to reserve my polyglottalism till Pentecost! Now, thanks to CWS, maybe we can sing "Nearer the Cross" this coming Sunday.

CWS - I have in my library a copy of "Glorious Gospel Hymns", the hymnal c. by the Church of the Nazarene in 1931. I thought it would be a good place to look for tunes by Phoebe and I found 3 besides the 2 you have mentioned in your post.

The first is printed with words by Mrs. Mary D. James and is called "Consecration".

The second is printed with words by Mrs. J.H. Knowles and is called "He Has Come". It also has this curious notation beside her name: Mrs. J.F. Knapp. By per. I don't remember seeing this before. Can you enlighten me?

The third is actually by William Knapp but I wondered if that was a pseud. It is printed with words by Isaac Watts and is called "Great God! Attend, While Zion Sings".

Are these some of the 16 you have already found?

"By per." probably means "By permission", indicating that it was included with the permission of the copyright owner.

I do have those two songs by Phoebe, but I appreciate your search.

William Knapp was an 18th c. English church composer, and the tune you found sounds like it might be WAREHAM, which is the only familiar one we still know of his. It has come up in discussion here a few times and was used here: