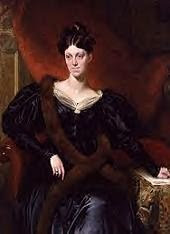 Harriet Martineau, born today in 1802, has become known as the first woman sociologist. She published more than fifty books, several based on her travels, and once wrote "When one studies a society, one must focus on all its aspects, including key political, religious, and social institutions."
She was born in Norwich, into a Unitarian family. Her education was much broader than most girls of the time, which enabled her to earn a living at writing after the death of her father and the failure of the family business. She began writing for the Monthly Repository, a Unitarian journal, and published her first book for children in 1823, Devotional Exercises and Addresses, Prayers and Hymns.
Her younger brother James was a well-known Unitarian minister who wrote hymns and edited three hymnals, including Hymns of the Christian Church and Home (1840). Their relationship was close for many years, but also somewhat competitive. Harriet did not write many hymns, but she may have been attracted to them because of her brother's interest.
Faith grasps the blessing she desires,
Hope points the upward gaze;
And Love, celestial Love, inspires
The eloquence of praise.

But sweeter far the still small voice
Heard by no human ear,
When God has made the heart rejoice,
And dried the bitter tear.

No accents flow, no words ascend;
Earth's speech is futile there;
But God will always comprehend
And answer silent prayer.

The hymn is perhaps more meaningful when you know that Harriet Martineau became deaf in her teen years.
An extended stay in the United States (1834-1836) led to a strong association with American abolitionists and their cause, which she was to support for the rest of her life (she had previously written against slavery in articles and books). Her influential three-volume Society in America was published after her return to England.
Martineau gradually abandoned her Unitarian beliefs in favor of "freethinking," which many called simply atheism. This may partially explain why her hymns are not better known; editors would have avoided texts by controversial writers.
She died in 1876 after twenty years of poor health. She had written a two-volume autobiography to be published upon her death, and asked her friend and fellow abolitionist Maria Weston Chapman to complete a third volume.
Posted by C.W.S. at Saturday, June 12, 2010