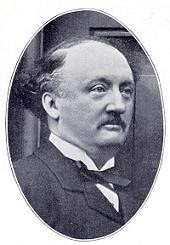 Composer John Stainer was born in London on this day 170 years ago. His father was a schoolmaster and good amateur musician and the young Stainer learned the piano and organ at a young age (there were reportedly five pianos in the house as well as a chamber organ).
He became a boy chorister at age eight at St. Paul's Cathedral and a few years later was playing the organ there on occasion. When Stainer was a teen, Frederick Gore Ouseley heard him play and invited him to be the organist at the music school Ouseley had established at Tenbury. During those years Stainer also attained a Bachelor of Music degree from Oxford University.
After receiving two more advanced music degrees (one for his oratorio Gideon in 1865) he returned to St. Paul's in the position of organist. He became renowned for improving musical standards at the cathedral during his tenure there. Stainer was also a government inspector of music training and visited elementary school training colleges, interviewing the students and evaluating the programs. He was knighted in 1888 for his many contributions to English music.
His compositions include forty-two anthems, four oratorios (including The Crucifixion, still performed today), service music for the Anglican church, organ works and vocal madrigals. His hymn tunes run to several dozen, at least (though not many are still sung), and he also edited The Church Hymnary for the Church of Scotland. Another book by Stainer still studied today is The Music of the Bible (1879), which looks like it might deserve more exploration.
This short morning hymn, set to one of Stainer's tunes, is by an English Methodist writer and may have first appeared in this country in Hymns of the Spirit (1864), the Unitarian hymnal compiled by Samuel Longfellow and Samuel Johnson. It was retained in other Unitarian hymn collections into the twentieth century.
The light pours down from heaven
And enters where it may;
The hearts of all earth's children
Are cheered with each bright ray
So let the soul's true sunshine
Be spread o'er earth as free,
And fill our waiting spriits
As waters fill the sea.

Then let each human spirit
Enjoy the radiance bright;
The Truth which comes from heaven
Shall spread like heav'n's own light;
Till earth becomes God's temple,
And every human heart
Shall join in one great service,
Each happy in our part.

They do rather look alike, don't they?

Thanks for sharing the link - but unfortunately it seems to be not working? Does anybody here at conjubilant.blogspot.com have a mirror or another source?

Thomas, I just tried every link in this post and they all work. Not sure what that means.