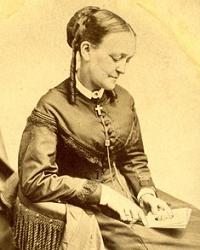 Universalist minister, activist, author and poet Phebe Hanaford was born on May 6, 1829 in Massachusetts.  I have already covered several aspects of her biography in previous entries (linked below), but she led a long and active life.

Her early concern with social justice issues led her to write an anti-slavery novel, Lucretia the Quakeress in 1853, the same year that Harriet Beecher Stowe's more well-known Uncle Tom's Cabin appeared.   After the assassination of Abraham Lincoln she wrote a popular biography of the president.  Her most popular book, however, was Daughters of America (1883), an encyclopedia of renowned and accomplished women from colonial times to her day.

Today's communion hymn by Hanaford is taken from a poem in one of her collectiions, From Shore to Shore (1871).

The feast of life is sweet;
I am a willing guest,
And joyful, at my Savior's feet
I heed his high behest.

I eat the living Bread,
I drink the Cup divine;
And love within my heart is shed
And light shall 'round me shine.

With what exultant joy
My Savior, I shall sing!
Thy praise shall be my soul's employ
Till heav'n's high arch shall ring,

Still at the feast of life
For strength let me sit down
Till victor, through thee, in the strife
I wear the glorious crown.

The tune FESTAL SONG is most often associated with the hymn Rise up, O men of God, by William Pierson Merrill, but that's not a text I would ever be writing about.  Contemporary hymn writer Ruth Duck has written a modern text for this tune as a sort of replacement: Arise, your light is come!, which appears in some newer hymnals.  I think you should seek it out if possible; it's quite good (and more grounded in scripture than Merrill's).

The picture below depicts Phebe Hanaford in the pulpit of the New Haven Universalist Church which she pastored in the 1870s.  Since I first wrote about her a few years ago, a biography of her (the first!) has been published, A Mighty Social Force.  One of the contributors, Sarah Barber-Braun, is a long-time scholar of Hanaford and her work, and successfully campaigned for a headstone to finally be placed at Hanaford's unmarked gravesite in 1998. 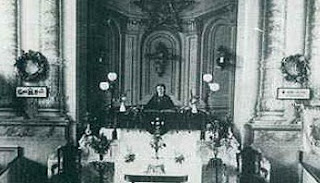