Hail the Sun of Righteousness 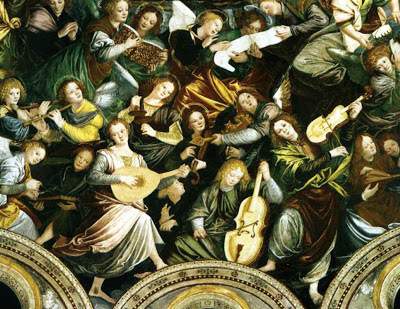 Hark! The herald angels sing,
“Glory to the newborn King;
Peace on earth, and mercy mild,
God and sinners reconciled!”
Joyful, all ye nations rise,
Join the triumph of the skies;
With th’angelic host proclaim,
“Christ is born in Bethlehem!”

Christ, by highest heav’n adored;
Christ the ever-living Word;
Late in time, behold him come,
Offspring of a virgin’s womb.
Veiled in flesh the Godhead see;
Hail th’incarnate Deity,
Lo! you come with us to dwell,
Jesus, our Emmanuel.
Refrain

Hail the heav’n-born Prince of Peace!
Hail the Sun of Righteousness!
Light and life to all he brings,
Ris’n with healing in his wings.
Mild he lays his glory by,
Born that we no more may die.
Born to raise us from the earth,
Born to give us second birth.
Refrain

Charles Wesley's text, originally titled Hymn for Christmas Day, has been altered by many hands since shortly after it was first published, long before it became familiar around the world.  Indeed, his original first line was Hark! how all the welkin rings, "welkin" being a word for the vault of heaven.

When we were working on our hymnal project for the Metropolitan Community Churches, we received an angry letter from someone accusing us of changing this Christian hymn into a pagan one because we had supposedly exchanged "Sun" for "Son" in the third stanza.  However, "Sun" was actually Wesley's word, coming from Malachi 4:2: But for you who revere my name the sun of righteousness shall rise, with healing in its wings. This is part of a longer passage where the prophet Malachi is telling of the promised Savior to come.  I still wonder how many people who sing this hymn by heart assume that the word really is "Son." And of course, I couldn't resist using the line as the title of this post.

Wesley's final two stanzas are rarely, if ever, sung any more (though I would love to hear if anyone did sing them this year).  They would sound a bit odd to many.

Come, Desire of nations, come,
Fix in us thy humble home;
Rise, the woman’s conq’ring Seed,
Bruise in us the serpent’s head.
Now display thy saving power,
Ruined nature now restore;
Now in mystic union join
Thine to ours, and ours to thine.
Refrain

Adam’s likeness, Lord, efface,
Stamp thine image in its place:
Second Adam from above,
Reinstate us in thy love.
Let us thee, though lost, regain,
Thee, the Life, the inner man:
O, to all thyself impart,
Formed in each believing heart.
Refrain

Before the text became joined to Mendelssohn's tune, it was sung to several others, and often to the tune we now know as EASTER HYMN, divided into four-line stanzas with no refrain, but with an Alleluia at the end of each line.

Mendelssohn's tune is derived from the first twenty measures of the second movement of his Festgesang, composed in 1840.  The composer thought that this melody might go well with another song of some sort, but he wrote to a friend that "it will never do to sacred words. (...) The words must express something gay and popular, as the music tries to do."  After Mendelssohn's death. William H. Cummings, organist at Waltham Abbey in England, adapted the tune to Wesley's text, probably not knowing anything of  Mendelssohn's letter.

Four Years Ago: Once in royal David's city

Three Years Ago: Where is this stupendous stranger?

Good for you and thank you for your website! This is a beautiful line in the scriptures and I have used it in one of my songs.

Thanks for stopping by, Elaine.

Regular readers of this site should check out her site at hymnserve.com

Wesley's hymn text was altered by three other Englishmen, giving us our familiar version.
Most notably, the opening couplet was changed by fellow evangelist George Whitefield (1714-70) in his Hymns for Social Worship in 1753, giving us the name by which the hymn is known today.
Whitefield made other, more minor, changes (for example, Whitefield preferred "Son of Righteousness" despite the loss of the scriptural allusion), and he, at least initially, omitted Wesley's last four theologically rich (four line) stanzas
(difficult to verify - I don't have access to the 1853 edition).