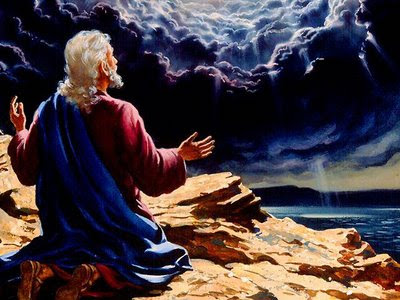 Today is the feast day of Saint John the Evangelist, one of the twelve disciples (perhaps the "beloved disciple")  and author of three Epistles and one Gospel.  Throughout much of Christian history he was also believed to be the author of the Book of Revelation during his exile to the Greek island of Patmos.. Though this is now believed by some scholars to be unlikely, it is the subject of  today's hymn by the seventeenth-century French priest Nicolas le Tourneaux.

An exile for the faith,
Of his incarnate Lord,

With eagle gaze beyond the stars
The loved disciple soared.

There the new City, bathed
In clear celestial light,
The home of bliss his sprit saw,
The land that hath no night.

There heard through highest heav'n
The Alleluia sound,
The great Amen that ever rolls
Th'eternal throne around.

O grant us, Christ, with John
Into these courts to gaze,
To see the rainbow 'round thy throne
And hear those songs of praise.

Today is also the birthday of composer John Goss (December 27, 1800 - May 10, 1880), an eminent English church musician of the Victorian age who trained several other composers of the following generations.