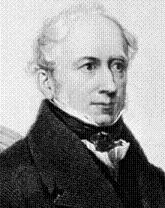 Hymnwriter James Montgomery was born today in 1771, in Scotland. His parents were missionaries in the Moravian church, who left young James with friends while they traveled to evangelize the West Indies, and unfortunately both died there.

He wrote poetry from a young age (even being expelled from school once because of it), and as an adult became a newspaper editor. He wrote several long secular poems, some on political subjects. However, Montgomery correctly believed that his hymns (about 400 in total) would be most remembered out of all his work. Nearly any hymnal index you check today will still contain his hymns, several of which have already been covered here (click on his name tag below).

Sing we the song of those who stand
Around th’eternal throne,
Of every kindred, clime, and land,
A multitude unknown.

Toil, trial, suffering, still await
On earth the pilgrim throng,
Yet learn we, in our earthly state,
The Church Triumphant’s song.

“Worthy the Lamb!” we join to sing,
“Who died for souls to save;
Henceforth, O death! where is thy sting?
Thy victory, O grave?”

Then, Alleluia! power and praise
To God in Christ be given;
May all who now this anthem raise
Renew the strain in heav’n!

Following his death in 1854, a monument was erected at his gravesite in Sheffield in 1861. The inscription reads in part: Wherever poetry is read, or Christian hymns sung, in the English language, 'he being dead, yet speaketh' by the genius, piety and taste embodied in his writings.

We're still singing -- both Montgomery's hymns and those of the "multitude unknown."