And Songs of Gladness Ring

The appointed psalm for the day in my church this morning was Psalm 67. The choir sang it as usual, and later in the service we sang an anthem setting of the text by William Mathias which was written for the wedding of Prince Charles and Diana in 1981.

In some traditions, the psalms are still sung in metrical form, so Psalm 67 can also be shared by the whole congregation in this way.

O God, to us show mercy
And bless us in thy grace;
Forever shine upon us
The brightness of thy face;
That so thy way most holy
On earth may soon be known,
And unto every people
Thy saving grace be shown.

O God, let people praise thee,
Let all the nations sing;
In every land let praises
And songs of gladness ring;
For thou shalt judge the people
In truth and righteousness,
And through the earth the nations
Thy perfect rule confess.

O God, let people praise thee,
Let all the nations sing,
For earth in rich abundance
To us its fruit shall bring.
The Living God shall bless us,
Shall to us blessing send,
And all the earth shall know God
To its remotest end.

This paraphrase comes from The Psalter (1912), published by the United Presbyterian Board of Publication, a hymnbook which was used by several different Presbyterian subdenominations for many years. A sturdy, familiar tune like LANCASHIRE often works with texts like this, which are not sung often and don't usually rise to the level of anyone's "favorite" hymn.

The Confession of Saint Peter 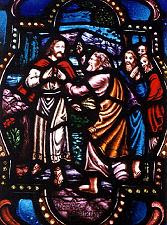 In many liturgical churches, January 18 marks the Confession of Saint Peter, which commemorates the apostle's declaration of the Godhood of Jesus, as told in Matthew 16:13-20. This is apparently the first time that the followers of Jesus realized exactly who they had been following.

Today's hymn is by the Anglican hymnwriter (and eventually Bishop) William Walsham How, and first appeared in Church Hymns (1871), a hymnal produced by the Society for Promoting Christian Knowledge (still in existence today). How was also the chair of the committee that compiled this hymnal.


“Thou art the Christ, O Lord,
The Son of God most high!”
For ever be adored
That name in earth and sky,
In which, though mortal strength may fail,
The saints of God at last prevail!

Oh,great was Peter blest
With blessedness unpriced,
Who, taught of God, confessed
The Godhead in the Christ!
For of thy Church, Lord, thou didst own
Thy saint a true foundation stone.

Thrice was he put to shame,
Thrice did the dauntless fall;
But, oh, that look that came
From out the judgment hall!
It pierced and broke his fearful heart,
And foiled the Tempter’s sifting art.

Thrice fallen, thrice restored!
The bitter lesson learnt,
That heart for thee, O Lord,
With triple ardor burnt.
The cross he took he laid not down,
Until he grasped the martyr’s crown.

Oh, bright triumphant faith!
Oh, courage void of fears!
Oh, love most strong in death!
Oh, penitential tears!
May all these keep us lest we fall,
And make us go where thou shalt call.

There are not many hymns written specifically for this day, but the theme certainly suggests several general hymns which could be sung.

The Feast of the Epiphany 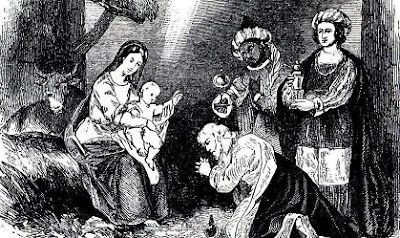 January 6 is the "official" date for the Feast of the Epiphany, though your church may celebrate it on Sunday. In some parts of the world, it is better known as Three Kings Day, but by any name it marks the visit to the infant Jesus by people of distant countries (whether they were indeed kings, or magi, or whatever), as opposed to the nearby shepherds. It signifies the eventual importance of this baby who was to be known around the world, not just in Bethlehem or Galilee.
This hymn was written by William Chatterton Dix, whose work we have seen before, and appeared in his first collection, Hymns of Love and Joy (1861). Reportedly he wrote it on the feast day, January 6, 1856.
As with gladness those of old
Did the guiding star behold;
As with joy they hailed its light,
Leading onward, beaming bright;
So, most gracious Lord, may we
Evermore be led to thee.
As with joyful steps they sped
To that lowly manger-bed;
There to bend the knee before
Christ, whom heaven and earth adore;
So may we with willing feet
Ever seek the mercy seat.
As they offered gifts most rare
At that manger rude and bare;
So may we with holy joy,
Pure and free from sin's alloy,
All our costliest treasures bring,
Christ! to thee, our heavenly King.
Holy Jesus! every day
Keep us in the narrow way;
And, when earthly things are past,
Bring our ransomed souls at last
Where they need no star to guide,
Where no clouds thy glory hide.
In that heavenly country bright,
Need they no created light;
Thou its light, its joy, its crown,
Thou its sun which goes not down;
There for ever may we sing
Alleluias echoing.
William Chatterton Dix, 1856; alt.
Tune: DIX (7.7.7.7.7.7.)
Conrad Kocher, 1838; adapt. William H. Monk, 1861
This well-known tune was altered slightly from its German original form by William Henry Monk, editor of Hymns Ancient and Modern (1861), where it was first matched to this text. It was probably also Monk who named the tune for this text's author.
P.S. You may have thought that after three years (beginnning a fourth later this month) that we have run out of familiar hymns, but as you can see we're not done yet.
Three Years Ago: Saw you never, in the twilight
Two Years Ago: Earth has many a noble city
One Year Ago: What star is this, with beams so bright

P.S. You may have thought that after three years (beginnning a fourth later this month) that we have run out of familiar hymns, but as you can see we're not done yet.
Three Years Ago: Saw you never, in the twiligh
Two Years Ago: Earth has many a noble city
One Year Ago: What star is this, with beams so bright
Posted by C.W.S. at Friday, January 06, 2012 3 comments:

Another Year Its Course Has Run

O God, whom neither time nor space
Can limit, hold, or bind.
Look down from heav'n, thy dwelling place
With love for humankind.
Another year its course has run,
Thy loving care renew;
Forgive the ill that we have done,
The good we failed to do.
In doubt or danger, all our days,
Be near to guard us still;
Let all our thoughts and all our ways
Be guided by thy will.
O help us here on earth to live
From selfish strife set free;
To us at last in mercy give
Eternal life with thee.
Horace Smith, 19th cent.; alt.
Tune DUNFERMLINE (C.M.)
Scottish Psalter, 1615

Three Years Ago: Bessie Porter Head
Two Years Ago: O God, by whom all change is wrought
One Year Ago: Another year is dawning
Posted by C.W.S. at Sunday, January 01, 2012 3 comments: