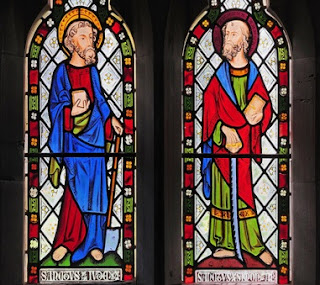 Today we mark the shared feast-day of Saint Simon and Saint Jude, the tenth and eleventh of Jesus' disciples listed in scripture. Tradition holds that they traveled together as evangelists to the Middle East, where they were martyred.

By all your saints still striving,
For all your saints at rest,
Your holy name, O Jesus,
Forevermore be blessed!
For those passed on before us,
We sing our praise anew
And, walking in their footsteps,
Would live our lives for you.
We praise these two apostles,
Who sealed their faith today;
One love, one zeal compelled them
To tread your sacred way;
May we, with zeal as earnest
The faith of Christ maintain,
And, bound in love as kindred,
At length your rest attain.
We pray for saints we know not,
For saints still yet to be,
For grace to bear true witness
And serve you faithfully,
Till all the ransomed number
Who stand before the throne
Ascribe all power and glory
And praise to God alone.

Seven Years Ago: Thou who sentest thine apostles

Six Years Ago: Let the church of God rejoice

Five Years Ago: When thou, O Christ, didst send the Twelve


P.S. One of these hymns, Let the church of God rejoice, is now available on Facebook (at "Conjubilant W. Song") for you to share.  It's appropriate for other saints' days as well, with a tune that deserves to be better-known. 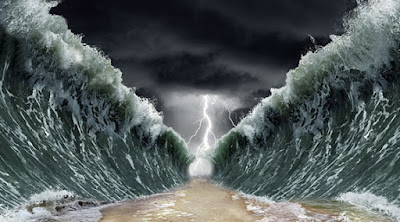 Last night I had the opportunity to hear a live performance of one of my very favorite choral works, Handel's Israel in Egypt (1739).  The words of the oratorio are taken from the Book of Exodus, telling the story of the Israelites held in slavery in Egypt and their eventual deliverance, set to a brilliant score by Handel.

Just about the only drawback to the performance was that several of the choruses were omitted, for whatever reason.  I missed them!  One of them is presented here, from Part Two - the words from Exodus 15:8, referring to the parting of the Red Sea.

And with the blast of thy nostrils, the waters were gathered together.
The floods stood upright as an heap.
The depths were congealed in the heart of the sea.

Each of these three sentences is set to a unique musical phrase, and in true Handelian fashion, they are then played off against one another, cavorting and merging and overlapping. 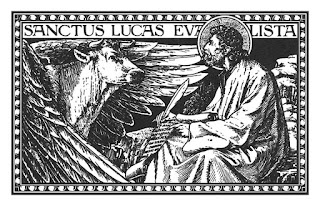 By all your saints still striving,
For all your saints at rest,
Your holy name, O Jesus,
Forevermore be blessed!
For those passed on before us,
We sing our praise anew
And, walking in their footsteps,
Would live our lives for you.
For that beloved physician,
All praise, whose Gospel shows
The Healer of the nations,
The Sharer of our woes;
Thy wondrous grace, O Savior,
On bruised hearts may you pour,
And with true balm of Gilead
Anoint us evermore.
We pray for saints we know not,
For saints still yet to be,
For grace to bear true witness
And serve you faithfully,
Till all the ransomed number
Who stand before the throne
Ascribe all power and glory
And praise to God alone.
Horatio Bolton Nelson, 1864; alt.
Tune: ST. THEODULPH (7.6.7.6.D.)
Melchior Teschner, 1615; harm William G. Monk, 1861

(One of the symbols associated with Saint Luke is a winged ox.)

(Also, we can sing the tune ST. THEODULPH at other times beyond Palm Sunday.)

Six Years Ago: What thanks and praise to thee we owe
Posted by C.W.S. at Sunday, October 18, 2015 No comments:

John Bowring (October 17, 1792 - November 23, 1872) was raised in the Unitarian faith, but his hymns, which he began writing in the 1820s, were not limited in any way.  His most well-known text, In the cross of Christ I glory, is especially unlikely to have appeared in any Unitarian collections in the last 150 years or more (though the first line was inscribed on his tombstone).  Bowring also wrote a total of thirty-six books, including poetry, essays, and political treatises.

First elected to the House of Commons as a Radical in 1835, he promoted his ideas of free trade and prison reform, and was largely responsible for the establishment of the first decimal coin in Britain, the florin (1/10 of a pound sterling).  Following his political career he was knighted in 1854 and became a successful diplomat in China and later Governor of Hong Kong.

This hymn by Bowring is probably a bit fanciful for a modern hymnal but it's just the sort of thing I like.  Hymnary.org has found it in 37 different older hymnals, more appearances than several of Bowring's other texts.

Nature, a temple worthy thee,
Beams with thy light and love;
Whose flowers so sweetly bloom below,
Whose stars rejoice above;
Whose altars are the mountain-cliffs
That rise along the shore;
Whose anthems, the sublime accord
Of storm and ocean-roar.

Our song of gratitude is sung
By spring’s awakening hours;
And summer offers at thy shrine
Its earliest, loveliest flowers;
But autumn brings its golden fruits,
In glorious luxury giv'n;
While winter’s silver heights reflect
Thy brightness back to heav'n.

Contemporaneous opinions of Bowring were decidedly mixed.  The author Harriet Martineau described him as "a supreme charlatan and worse." While he was successful in various spheres, his finances were usually in disarray.  A new biography, Free Trade's Missionary: John Bowring in Europe and Asia by distant relative Philip Bowring was published just last year.

Unitarian hymn writer and hymnal editor Frederick Lucian Hosmer was born today in 1840, in Framingham, Massachusetts.  In 1872, following graduation from Harvard Divinity School a few years earlier, he was "ordained to a fruitful ministry," as described by the Handbook to The Hymnal (1935 - Presbyterian), serving both Unitarian and Congregational churches in different states.

Writing hymns came later, and he was considered the finest hymn writer of his day (a worthy successor to Samuel Longfellow) among the Unitarians, but several of his texts were taken up by hymnals outside that denomination as well.

In the fourth volume of Heralds of a Liberal Faith (1952), American Unitarian Association president Samuel Atkins Eliot wrote of Hosmer:

...a poet intent on making his hymns as perfect an expression of his thought as possible. He had a wide knowledge of hymnody and sound theories of hymn construction which he expounded in lectures at the Harvard Divinity School in 1908. His hymns are the expression of a cheerful faith and are carefully wrought out in simple and facile forms which do not disclose the labor and care which went into their making.

In today's hymn, Hosmer only wrote the second stanza.  The first had been written nearly a century earlier, by Reginald Heber, and over the years other people have added stanzas of their own.  The stanza by Hosmer was written in 1912, and may have first appeared in The New Hymn and Tune Book (1914), a Unitarian collection that Hosmer had helped compile.

God that madest earth and heaven,
Darkness and light;
Who the day for toil hast given,
For rest the night;
May thine angel guards defend us,
Slumber sweet thy mercy send us,
Holy dreams and hopes attend us,
This livelong night.

When the constant sun, returning,
Unseals our eyes,
May we, born anew, like morning,
To labor rise.
Gird us for the tasks that call us,
Let not ease and self enthrall us,
Strong through thee, whate'er befall us,
O God most wise.

The idea of adding a stanza or two to an existing hymn is not particularly novel and may be done for various reasons, though some consider it unnecessary tinkering with the original author's intent.  In this case I suspect that people just thought that a hymn with a single stanza was too short and was less likely to be sung at all.  Certainly the stanzas added to Mary Lathbury's Break thou the bread of life seem intended to "correct" her original concept of seeking God "beyond the sacred page" (of scripture).  I believe that several hymnal editors before the twentieth century, when scholarship around hymns and their origins became more widespread, often added stanzas to hymns either original or borrowed from other hymns, and since those books often didn't include any credits at all, no one knew the difference.

This continues in more modern times; I am particularly thinking of the stanza added by Georgia Harkness to This is my song, O God of all the nations by Lloyd Stone, found in a number of modern hymnals.  And I've even done it myself a few times, such as this instance seen here a few years back.

One Year Ago: Frederick Lucian Hosmer

I'm finally on the way to something here that I've thought about for a long time.  Now that the blog has a Facebook page (at Conjubilant W. Song if you haven't been there) I have the easy opportunity to post photos in albums.  If you go to the page, under "Photos," then "Albums" you will see an album titled "Downloadable Hymns."

Five hymns from the last eight years of the blog are there so far which you can examine, download, print out, share, whatever.  Four are from the recent hymn festival I led on women of the Bible, and the fifth is one of the first hymns presented here, back in January 2008 (seen partially above).  More will follow from the archive, so if you have things you'd like to see, let me know.  If you do download something, please "like" it so I will have some feedback.

The photos are not as sharp as I would like (for you to reproduce), so I will keep working on that, but at least you can get a better idea of what these hymns would look like interlined with the music.  I have always wanted to be a bit more of a resource rather than just a collection of curiosities and I have made some small progress on that goal.
Posted by C.W.S. at Sunday, October 11, 2015 No comments: 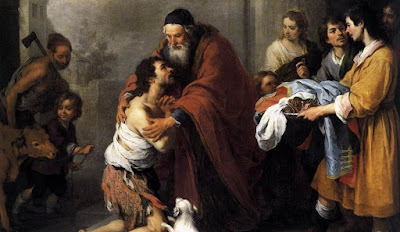 The Reverend Henry Alford was born today in London in 1810.  Ordained in the Church of England in 1833, he eventually was named Dean of Canterbury Cathedral in 1857.  He is still known today for his four-volume translation and commetary on the New Testament.

For our purposes here he is best known as the author of Come, ye thankful people, come, but he wrote many other texts and even some tunes, and also edited hymnals, including Psalms and Hymns (1844) and The Year of Praise (1867) which was especially for use at Canterbury. Actually, as a boy of 11, he compiled his first hymnal, which he titled A Collection of Hymns for Sundry Occasions (unpublished, alas!).

Today's hymn by Alford is a response to the parable of the Prodigal Son, from Luke 15:11-32, updated a bit for contemporary worship.

God of unfailing grace,
Send down thy Spirit now;
Raise the dejected soul to hope,
And make the lofty bow.

In countries far from home
On earthly husks we feed;
Back to our shelt'ring home, O God,
Our wand'ring footsteps lead.

You might suspect that I like quite a few of Alford's hymns, as several have already been seen on the blog (click on his tag below).  My particular favorites include We walk by faith and not by sight and Ten thousand times ten thousand.

P.S. - The art above is detail from The Return of the Prodigal Son (1670) by Bartolome Esteban Murillo.

Our Morning and Our Sun

O God, your world is sweet with prayer;
The breath of Christ is in the air;
We rise on your free Spirit’s wings,
And every thought within us sings.
You are our Morning and our Sun,
Our work is glad, in God begun;
Our foot-worn path is fresh with dew,
For you created all things new.
O God, within us and above,
Close to us in the Christ we love,
Through him, our only guide and way,
May heavenly life be ours today!

Hymnwriter Lucy Larcom overcame a difficult youth of manual labor to become a
teacher, editor, and a widely-published poet and author. In this text she widens the
concept of God with the names of "Morning" and "Sun."