John Pyke Hullah, born on this day in 1812, is primarily remembered as a music educator, bur he was also a composer and editor. His mother encouraged his musical education when he was young; she had studied with the composer John Danby (who, in turn, was a pupil of Samuel Webbe)..

Hullah entered the Royal Academy of Music in 1833.  One of his fellow students was Fanny Dickens, whose brother was not yet a famous novelist.  A few years later, Hullah would write the music for an operetta with a libretto by Charles Dickens, The Village Coquettes.  The work was not successful, and Dickens reportedly attempted to buy all the copies of the score to keep it from being presented again, but some of the songs by Hullah were published separately as sheet music.  He later wrote two more operatic works which were presented at Covent Garden, but most of his compositions were glees, a particular type of song popular in England, written for at least three voices.

Hullah believed that musical education, particularly in choral singing, fostered an important type of community.  Singing schools in England had grown especially popular in the nonconformist churches of the eighteenth century, and he encouraged this sort of education.  This became known as the choral revival, or the Psalmody Movement.  Hullah also wrote popular books on music theory, such as his Rudiments of Musical Grammar, which were used for many years.  He was one of the founders of Queen's College, the first English institution of higher education for women.

Some of these things suggest that he must have had some interest in congregational singing as well, and indeed he did write several hymn tunes.  He also edited two collections, A Hymnal, chiefly from The Book of Praise (1868) and Hymns for the Young (1872).  Today's tune by Hullah, BENTLEY, was perhaps his longest-lasting tune (one of only two of his available at the Cyber Hymnal) though it probably is not very well known today. The short text by James Edmeston has a musical theme which makes it appropriate for Hullah's birthday (though I am not the first to join this tune and text).

When shall the voice of singing
Flow joyfully along?
When hill and valley ringing
With one triumphant song,
Proclaim the contest ended,
And Christ, who once was slain,
Again to earth descended,
In righteousness to reign.

Then from the craggy mountains
The sacred shout shall fly,
And shady vales and fountains
Shall echo the reply;
High tower and lowly dwelling,
Shall send the echo round,
All hallelujahs swelling
In one eternal sound.

In later years John Hullah was appointed a national musical inspector for training schools, a post which he held for a decade until two years before his death, in 1884.

Nativity of John the Baptist 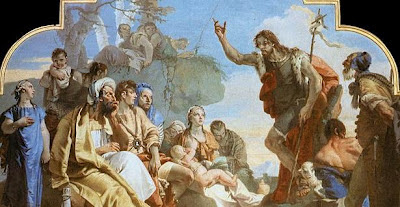 The birth of John the Baptist is commemorated in some churches on June 24 (or June 25 this year, to move it away from a Sunday).  Many churches might only mention John during Advent, or perhaps at the Baptism of Jesus, but some additionally mark the day of his martyrdom by beheading (in the famous story of Salome) on August 29.

Today's hymn comes from The Holy Year (1865), a book of hymns by Christopher Wordsworth, delineated for each Sunday of the church year and many saints' days.  Wordsworth wrote eleven stanzas, but I can't imagine a modern congregation singing many more than four.

In the wilderness prepare ye
For our God a way to go,
Ev'ry valley shall be lifted,
Ev'ry hill shall be made low;
Straight shall be the crooked places,
And the rough be level made,
And all flesh shall see the glory
Of the Lord of Hosts displayed.

In his mother's womb exulting
Did the Voice salute the Word,
In the wilderness the Servant
Gladly did proclaim the Lord;
When the Spirit came upon him
Whom the Maker's love did send,
Christ the Savior sent from heaven,
John on earth the Savior's friend.

In our hearts thy way preparing,
May we, Christ, thy grace obtain,
Level hills, fill up the valleys,
Crooked straight and rough make plain;
Haste, O haste thy second coming!
May thy everlasting Word
Bloom and flow'r through generations,
And be glorified, O Lord!

The familiar tune BEECHER, by John Zundel, was named for Henry Ward Beecher, pastor of Brooklyn's Plymouth Church, where Zundel was organist.  I chose it for this text in honor of Beecher's birthday, which is also today.

P.S. The painting above, John the Baptist Preaching (1733) is by Giovanni Battista Tiepolo

Three Years Ago: Nativity of John the Baptist
Posted by C.W.S. at Sunday, June 24, 2012 No comments:

This doesn't happen very often, but for some reason it turned out that all five hymns we sang in worship this morning were hymns I have already written about.  Usually there are at least one or two that are more modern and thus still under copyright.  It was a good batch to sing.

Processional:  Praise be to God, the Almighty

Sequence (before the Gospel): We walk by faith, and not by sight

Offertory: O what their joy and their glory must be

Communion: God's time shall come (better tune here than the one we sang)

It is a good thing that even though our services are shortened a bit during the summer we still manage to sing five hymns!

William Chatterton Dix (June 14, 1837 - September 9, 1898) was named by his father, John, a surgeon who was also a writer.  John had written a biography of the poet Thomas Chatterton and had written poetry himself; it has been speculated that he wanted his son to write also.

William, like his father the surgeon, embarked on a "legitimate" career at an insurance firm, but also found time to write, as an avocation.  He published four volumes of hymns and poems between 1861 and 1878.

Today's hymn for peace comes from Dix's collection A Vision of All Saints (1871) which does also include several texts on the saints of the church.  The story of Noah's Ark does not often come up in hymnody but I like how it is used here.

Is it in vain we pray for peace
While signs and notes of strife abound,
In vain we ask that war may cease,
While hostile forces camp around?

Rough billows, waters wild and dread
Still bear the Ark upon their breast,
But God's fair rainbow overhead
Is sign of peace and pledge and rest.

Say, will the winged prayers we send
Forth from the Ark return again?
Yes, some have come to point the end,
To tell of sunshine after rain.

They bear the olive-branch to show
That flood and storm are passing o'er;
Our hearts are strong, for well we know
The waters shall o'erwhelm no more.

June 11, the feast-day of Saint Barnabas, is probably mostly celebrated these days only by churches that bear his name.  An early convert to Christianity, his story is mostly told in the Acts of the Apostles.

Henry Alford, in the second hymnbook he complied, Psalms and Hymns (1844), appoints the following hymn for this day.  It appears that it was chosen simply because it includes the word consolation, and Barnabas is traditionally called the Son of Consolation.  In his later collection, The Year of Praise (1867), Alford wrote his own hymn for the day (see the second link below) which is, perhaps, somewhat more appropriate.

Author of mercies, in thy Word
What endless glory shines!
Forever be thy name adored
For these celestial lines.

Here the fair tree of knowledge grows
And yields a free repast;
And richer fruits than nature shows
Invite the longing taste.

Oh, may these hallowed pages be
Our joy by day and night,
And still new beauties may we see,
And still increasing light.

This text, by hymnwriter Anne Steele, was almost certainly written with no thought of Saint Barnabas, but you never know what a hymnal editor will do with your work years later. This was actually one of her better-known hymns for many years. 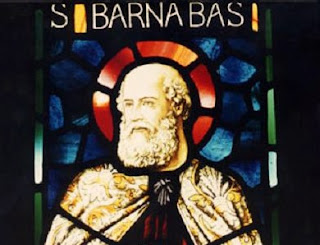 The Feast of Corpus Christi

The Feast of Corpus Christi is observed in some churches today, transferred from its true position on the Thursday following Trinity Sunday.  It commemorates the Eucharist, or Holy Communion, as the body of Christ.  It is a national holiday in several countries, and is sometimes celebrated with a procession.

The monstrance, seen in the illustration here, is a special vessel used to hold the consecrated host, particularly in special liturgies such as for Corpus Christi or for the Benediction of the Blessed Sacrament.

This hymn is known and loved by many who observe the feast on this day.