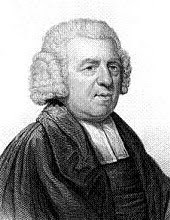 John Newton, whose birthday we mark today, was well-known in his own time for his influential collection titled Olney Hymns (named for the parish he led) which led to many congregations taking up the singing of hymns. However, he is much more well-known today as the author of Amazing grace; many people who couldn't name any other hymnwriter know of Newton because of that hymn and the story behind it.

Today's hymn comes from the last pages of Olney Hymns, a section of short hymns labeled After Sermons (though, in fact, in Newton's own church, all his hymns were sung after the sermon as they were specifically written to accompany his preaching). It was originally a general hymn, though in more recent times it has been slightly altered to be used as a wedding hymn, in this manner.

May the grace of Christ our Savior
And our Maker’s boundless love
With the Holy Spirit’s favor,
Rest upon them from above.

Thus may they abide in union
With each other and the Lord,
And possess, in sweet communion,
Joys which earth cannot afford. 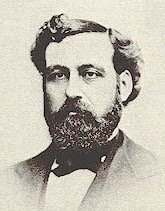 Gospel songwriter Philip Paul Bliss was born today in Pennsylvania in 1838. There are some accounts which claim that he really had no middle name; that his name was originally Philipp, and he decided to spell it differently by making the second "p" into a middle initial, but most modern sources believe that Paul was his true middle name.

He grew up in farm country, where he went to work in that profession as a boy of thirteen. He had little or no opportunity for exposure to music, but he did attend school as much as possible, in addition to work, and by age eighteen he was teaching school. Shortly after that, he met Lucy Jane Young and they were married in 1859. Lucy sang in her church choir and had received some musical education, and she encouraged his modest interest in music. Over the next few years he studied music more formally and discovered a talent for songwriting.

His first published (secular) song was Lora Vale, which was brought out by George Root's company. This new career avenue was very nearly delayed when he was drafted into the Union Army, in the spring of 1865, but as the Civil War was coming to an end the order was rescinded after two weeks. The following year Philip and Lucy moved to Chicago, where he went to work for Root's publishing house conducting singing schools and musical conventions, and continued to write secular and humorous songs, some under the pseudonym of Pro Phundo Basso.

In 1870 Bliss became both the choir director and Sunday school superintendent at the First Congregational Church of Chicago. Around this time he began to write Sunday School songs, and compiled the songbook The Charm in 1871, which included several of these songs. Over the next two years, he published three more collections.

In 1874 he joined Ira Sankey and Dwight Moody in their evangelical meetings as a song leader and soloist, and also began writing songs for their meetings. George Stebbins, in his Reminiscences and Gospel Hymn Stories (1924), recalled:

He had a voice of rare quality and splendid volume, a baritone of extraordinary range and evenness throughout... As a leader he occupied a position of prominence by reason of native gifts and years of enterience, which, combined with an impressive personality (he was six feet tall and of commanding stature, with features as perfect as form, and eyes that were large and kindly in expression), made him into the great leader of evangelistic song that he was.

In 1874 Bliss collaborated with Ira Sankey on the first volume of Gospel Songs, which contained this song which is still sung today.

During the next two years, Bliss wrote several more gospel songs (sometimes both words and music, sometimes collaborating with others), including the well-loved tune VILLE DU HAVRE for Horatio Spafford's text It is well with my soul. However, on December 29, 1876, Philip and his wife Lucy were killed in a horrific train accident in Ashtabula, Ohio while traveling back to Chicago from spending Christmas in Pennsylvania. He was reported to have escaped the crash, but returned to the burning train car to rescue her. The victims of the wreck were burned beyond recognition and were buried in a common grave in Ashtabula.

Friend and fellow songwriter Daniel Webster Whittle compiled the Memoirs of Philip P. Bliss, a brief biography which included testimonials from many friends and collaborators, which was sold to benefit the two young sons of Philip and Lucy, only two and four years old at the time of their parents' deaths. Many of Bliss's contemporaries believed that he would have become even more accomplished and popular as a songwriter had he lived to write for thirty more years.

Today, the Philip P. Bliss Gospel Songwriters Museum in Rome, Pennsylvania in their former family home (picture below), honors the legacy of the man and his work. Northeastern PA is not so far away from me, so it may be that a visit is in order at some point.