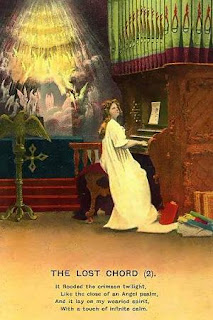 Today is more about a cousin to a hymn, by a writer and composer who did write hymns.

I recently got a CD by a choral group who shall remain nameless, which had an arrangement of The Lost Chord. I was curious to hear it, as this piece is really a solo song by composer Arthur Sullivan and poet Adelaide Anne Procter. Sullivan had planned to set the poem to music for a long time, but without success, and was finally able to do it when his brother Fred was dying.

The song was number one on the Victorian hit parade for quite some time, with astronomical sales of the sheet music. At a press conference in 1888 that introduced Edison's phonograph machine to London, a recording of the tune on piano and trumpet was played. You can see a series of postcards (including the one above) with the lyrics at this page.

The song was still quite popular early in the twentieth century, and was recorded by such luminaries as Enrico Caruso and Dame Clara Butt in the early days of sound recording.

As I said, it isn't a hymn, and I don't even think it's particularly religious. Let's call it Victorian metaphysics.

Seated one day at the organ,
I was weary and ill-at-ease;
And my fingers wandered idly
Over the noisy keys.

I know not what I was playing
Or what I was dreaming then,
But I struck one chord of music
Like the sound of a great Amen.

It flooded the crimson twilight
Like the close of an angel's psalm,
And it lay on my fevered spirit
With a touch of infinite calm.

It quieted pain and sorrow
Like love overcoming strife;
It seemed the harmonious echo
From our discordant life.

It linked all perplexèd meanings
Into one perfect peace,
And trembled away into silence
As if it were loth to cease.

I have sought, but I seek it vainly,
That one lost chord divine,
Which came from the soul of the organ
And entered into mine.

There are different versions you can hear at YouTube, including the ones mentioned above, but here's a boy soprano who would have gone over well in Sullivan's time.

Oh, and that CD -- the choral arrangement wasn't very good; the organ accompaniment was more interesting, which I guess is appropriate for this song.