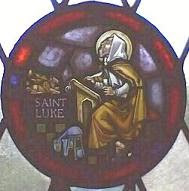 On October 18 many churches celebrate Saint Luke the Evangelist. Often accepted as the author of both the Gospel of Luke and the Acts of the Apostles, he is described in Paul's epistles as a physician from Antioch and a fellow traveler during Paul's missionary journeys. Unlike most of the early saints, he was not martyred and reportedly lived to the age of eighty-four.

Like several other hymns in honor of Luke, this oft-published one evokes the theme of healing and extols his Gospel writings. In addition, hymnwriter William MacLagan reminds us of Luke's stories that do not appear in the other Gospels, such as the Prodigal Son, and the great New Testament songs, Mary's Magnificat and Simeon's Nunc dimittis, which also only come down to us from Luke.

What thanks and praise to thee we owe,
O Source and Sacrifice divine,
For Luke, thy saint, through whom we know
So many a gracious word of thine.

How many a soul with guilt oppressed
Has learned to hear the joyful sound:
The prodigal's own sins confessed,
His father’s love, once lost, now found?

And still the church through all our days
Uplifts the songs that never cease,
The blessèd Mary’s hymn of praise,
The agèd Simeon’s words of peace.

O happy saint! whose sacred page,
So rich in words of truth and love
Pours on the church from age to age
This healing unction from above;

The witness of the Savior's life,
Paul the Apostle's chosen friend
Through weary years of toil and strife,
And still found faithful to the end.

So grant us, Christ, like Luke to live,
Beloved on earth, approved by thee,
Till thou at last the summons give,
And we, with him, thy face shall see.

Luke is not only the patron saint of doctors, but also of artists, due to a legend that he once painted a portrait of the Virgin Mary on a piece of cypress wood which was formerly a tabletop in the Nazareth home of the Holy Family. The painting, known as the Black Madonna of Częstochowa, remains on display to this day at a popular shrine in Poland.

P.S. The window above is from my own church here in Connecticut, where, serendipitously enough, this afternoon we will be singing Luke's Magnificat and Nunc dimittis (today, the setting by Felix Mendelssohn from 1847), traditionally part of the service of Choral Evensong which we celebrate several times during the year.