The Bread of Angels Sharing 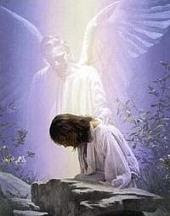 The appointed Gospel lesson for the First Sunday in Lent has remained the same in many traditions since the sixth century, the story of Jesus' sojourn in the wilderness. He spent forty days there, fasting, praying and resisting temptation, which we now mark in the church calendar with the season of Lent.
The final line in the story, from Matthew 4: 11, reads: Then the devil left him, and suddenly angels came and waited on him. This ties in to Psalm 91, also read today, and particularly verse 11: For God will command the angels to guard you in all your ways.
Which brings us to today's hymn, an anonymous Latin text from the seventeenth century which begins:
O esca viatórum,
O panis angelórum,
O manna coélitum,
Esuriéntes ciba,
Dulcédine non priva
Corda quæréntium.

This text has been set to music by several different composers, and translated into English a number of times as well. This version is drawn from a few different translations.
O Food of souls wayfaring,
The bread of angels sharing,
O Manna from on high!
We hunger; Christ, supply us,
Nor thy delights deny us,
Whose hearts to thee draw nigh.

O stream of love past telling,
O purest fountain, welling
From out the Savior's side!
Come now, thy love bestowing
On thirsting souls, and flowing
Till all are satisfied.

O Jesus, by thee bidden,
We here adore thee, hidden
'Neath forms of bread and wine.
Grant when the veil is riven,
We may behold, in heaven,
Thy countenance divine.

In one of the many stories from the life of Saint Dominic, his community of friars was unable to raise the necessary funds to feed themselves, after having given away their own possessions, and were visited by two angels who brought them sustenance. The mural below, picturing this story, is from the Convent of San Marco in Florence, painted by Giovanni Antonio Sogliani.

Thought you might be interested in my stuff. For the past few years I've been in the middle of project trying to re-engage with the hymns I grew up with. Here's a bit more:

Most of my indoor childhood life was spent around my parents’ piano in our living room. My earliest memories are of being under the big instrument, where I would study the details of the massive soundboard, trying to catch the patterns of the sustain pedal while my mum worked out her hymn arrangements. When I got a bit older I would sit on the piano bench next to my mum, singing an after-dinner hymn with my family. I was literally surrounded by hymns, and it's almost like I didn't really have a choice in the matter—that I was bound to do something with these old songs at some point.

Over the years I’ve realised that the extremely frustrating thing with sappy Contemporary Christian Music culture or stately hymns culture is that it subconsciously coerces people into thinking Christianity has a certain, particular personality. That if your faith isn’t intellectual (hymns culture) or emotional (choruses culture) then you’ve got a problem. I don’t think it’s something that would be vocalised by church leaders, but it’s a very (subtly) suffocating part of church culture. It’s the re-ordering of one’s identity from firstly being in Christ to firstly being in America (or, in Calvinism, in the black church, in suburbia or in whatever). When I began spending significant amounts of time with goofy and nerdy and brilliant and dumb and Australian and Arab and old and young Christians, I just couldn’t accept the two-party stately/sappy church music system anymore.

Fortunately, God’s grace spared me from rejecting church music wholesale and allowed me, within a very challenging yet supportive community, to work out my ideas—my goal of more honestly and more personally responding to the texts I grew up with. This is what I’m trying to do with JG HYMNS.

You can hear all that I've done at JGHYMNS.com.

Sorry for the spam - I'm having computer problmes this week that have left me unable to post.

Hope to be back online soon!