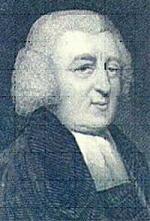 John Newton (July 24, 1725 - December 21, 1807) will always be best remembered for the hymn Amazing grace.  His well-known conversion experience as an adult would eventually lead him to an active role in the anti-slavery movement in Great Britain.  Fortunately, he did live to see the abolition of slavery there in 1807, months before his death.

Newton's many hymn texts were published together in his collected Olney Hymns (1779) but they had been written over several years, usually to accompany one of his sermons delivered as the rector of Olney parish. We can assume that today's text came from Newton's preaching on the first section of the fourteenth chapter of the Book of Judges, an episode in the life of Samson.

I don't believe that most of the book of Judges appears in modern lectionary cycles, and you may understand why if you read all the way to the end of Chapter 14.  I remember hearing about Samson in Sunday school, and of course his later encounter with Delilah is more well-known.  This hymn, according to Hymnary.org, only appeared in eight hymnals in the U.S., and none after the mid-nineteenth century.

The lion that on Samson roared,
And thirsted for his blood;
With honey afterwards was stored,
And furnished him with food.

Believers, as they pace along,
With many lions meet;
But gather sweetness from the strong,
And from the eater, meat.

The lions rage and roar in vain,
For Jesus is their Shield;
Their losses prove a certain gain,
Their troubles comfort yield.

The lions roar but cannot kill,
Then fear them not, my friends;
They bring us, though against their will,
The honey Jesus sends.

It's unlikely that this will ever be revived, especially with no lectionary connection, but I thought it was interesting, and I do like hymns based on Bible stories.