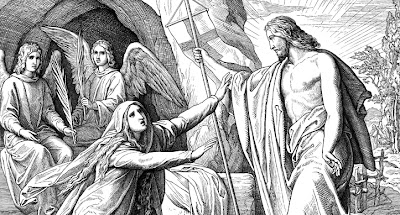 For our celebration of Easter we come to a lesser-known hymn, though it was probably sung in various places today.  We have spoken before about the Gospel lesson for today which tells the story of Mary Magdalene and the other female followers of Jesus who were the first witnesses to the Resurrection.  This Latin text is from the twelfth century, perhaps by the French monk Peter the Venerable:

This was translated by Elizabeth Rundle Charles in her collection The Voice of Christian Life in Song (1864).  However, it does not seem to have come into use as a hymn until well into the twentieth century.  Today's version is a slightly different adaptation of Charles's translation (originally in five stanzas) than the one that appears in modern hymnals.

Lift your voice rejoicing, Mary,
Christ has risen from the tomb;
Sad the scene he passed though lately,
Now as victor he is come.
Whom your tears in death were mourning,
Welcome with your smiles returning.
Let your alleluias rise!

Clothe yourself in gladness, Mary,
Let your face shine calm and clear.
All your pain and grief have vanished,
And the glorious Light is here!
Christ has burst the tomb's cold prison,
Over death triumphant risen.
Let your alleluias rise!

Life is yours for ever, Mary,
For your light is come once more
And the strength of death is broken;
Now your songs of joy outpour.
Ended now the night of sorrow,
Love has brought the blessed morrow.
Let your alleluias rise.

The few hymnals that now include this hymn have set it to modern (copyrighted) tunes of varying quality and/or singability, which may have kept it from spreading farther.  Unfortunately, the meter of the text (preserved from the original Latin) does not have a commonly-used tune to match.  This older tune by Clement Cotterill Scholefield (who wrote - or did he? - the well-loved ST. CLEMENT) is perhaps not exactly right either, but it will give you a sense of the text as a hymn.

Three Years Ago: The strife is o'er, the battle done

One Year Ago: Jesus Christ is ris'n today