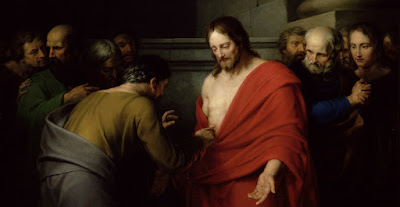 The story of "doubting" Thomas (John 20:24-29) is told today in many churches, and Thomas is found briefly in the well-known Easter hymn O sons and daughters (see below). Less often sung today are those hymns which focus specifically on today's Gospel reading, such as this one by Christopher Wordsworth in his collection The Holy Year (1862).

The wounds which Jesus once endured
Were stigmas of his shame;
But now they have for him procured
An everlasting name.

The nail-prints, and the lance's scar,
The work of torture's spite,
His bright triumphal trophies are,
and badges of his might.

"Behold these hands! at my command
Touch them," the Savior cried;
"Reach hither, Thomas, reach your hand,
And thrust it in my side."

Thomas obeyed the Savior's word,
"My Lord and God!" he said;
He owned his Sovereign and his Lord,
And unto God he prayed.

O mighty Conqueror of the grave!
To you be endless praise,
For all the proofs your mercy gave
That you yourself did raise.

We should remember that, while Thomas is held up as the "bad" example who didn't believe without seeing, according to Luke 24:10-11, none of the disciples believed the story told by the faithful women who went to the tomb on Easter until they themselves had seen Jesus.


P.S. - The painting above is named The Incredulity of Saint Thomas by American artist Benjamin West (1738-1820).

Eight Years Ago (Feast of Saint Thomas): We walk by faith and not by sight