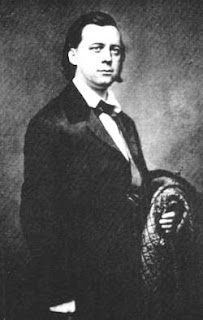 Henry Ward Beecher (born June 24, 1813) was the most famous clergyman of his time, a Civil War-era media star of a type we might recognize today. He'd get himself on television in this century, although unlike today's well-known television preachers his views were mostly liberal: favoring abolition, evolution, and women's suffrage.

He pastored the Plymouth Congregational Church in Brooklyn NY from its inception in 1847 until his death in 1887. Under his leadership the church was one of the largest in the country, with regular attendance in the thousands, and occasional guests such as Abraham Lincoln and Mark Twain came to hear Beecher's acclaimed sermons.

He's here today because he actively promoted congregational singing in worship. The first hymnal he compiled was Temple Melodies in 1851, which included about 500 hymns and 200 tunes. He soon decided that was inadequate, and in 1855 brought out the Plymouth Collection of Hymns and Tunes, with 1374 hymns and 367 tunes. Since he could get no publisher to bring out anything that extensive, the congregation raised the money themselves to have the first edition privately printed for their use. Both these hymnals were among the first in this country to include both words and music on the same page. Beecher also deliberately chose the texts from several different traditions, from psalm paraphrases, from the Englishmen Wesley and Watts, and (shockingly to some) from Unitarian and Roman Catholic sources. Before long the Plymouth Collection was being used in many other churches, no longer considered a publishing risk.

The members of Beecher's extended family were among the intellectual elites of the country, most of them acclaimed in their own fields. Like other Beecher ventures, the Plymouth Collection was a bit of a family affair. Novelist sister Harriet Beecher Stowe, then particularly famous following the publication of mammoth bestseller Uncle Tom's Cabin, contributed three hymns, and younger brother Charles was one of the music editors. Charles and his fellow music editor, John Zundel (longtime organist at Plymouth Church) both contributed several tunes to the hymnal. Zundel later wrote the hymn tune BEECHER, named for Henry Ward, and still used today for a few different texts.

This hymn is by Mrs. Stowe, with a tune by Charles, from Henry Ward's Plymouth Collection:

When winds are raging o’er the upper ocean,
And billows wild contend with angry roar,
’Tis said, far down, below the wild commotion,
That peaceful stillness reigneth evermore.

Far, far beneath, the noise of tempests dieth,
And silver waves chime ever peacefully,
And no rude storm, how fierce so e’er it flieth,
Disturbs the Sabbath of that deeper sea.

So to the heart that knows Thy love, O Purest!
There is a temple, sacred evermore,
And all the babble of life’s angry voices
Dies in hushed stillness at its peaceful door.

Far, far away, the roar of passion dieth,
And loving thoughts rise calm and peacefully,
And no rude storm, how fierce so e’er it flieth,
Disturbs the soul that dwells, O Lord, in Thee.

O Rest of rests! O Peace, serene, eternal!
Thou ever livest, and Thou changest never.
And in the secret of Thy presence dwelleth
Fullness of joy, forever and forever. 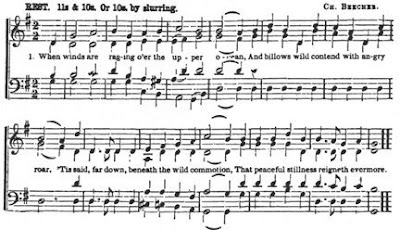 Harriet's text is very much of its time and would probably not go over well today, though I think there's a lot to like in it (you may notice - no alt.). Charles's tune is pretty rangy (that second line!) and a bit hard to match up with the text, written in an American style that would be largely supplanted by the English Victorian tune writers and their more stately stepwise-moving tunes, meaning that Charles's several other tunes had little chance to migrate to other, later hymnals. And there's another, much better-known tune called REST by Frederick C. Maker.

P.S. The Plymouth Collection was the first American hymnal to include Abide with me. It was on the facing page to the above hymn, indicating that it could be sung to the same tune. Luckily, a few years later, W. H. Monk wrote the tune that we know today (EVENTIDE) and saved us from singing it to Charles Beecher's REST (not really -- with REST it would never have survived until today)

Thanks. I actually rather like that tune (which I hadn't seen before), and don't think it's that hard to attach the syllables to the notes. Though I'll admit I'm glad we have Eventide! ;-)

I was intrigued to notice that Plymouth Church is not UCC but NACCC, a body whose Hymns for a Pilgrim People, published by GIA in 2007, is one of my favorite recent hymnals.

I just ran across a hymn I'd never seen before that I find rather good, so I'll post it (altering one occurrence of "men" to "we" for gender inclusivity, but leaving the incipient Lords) here (and maybe later in one of my own blogs); it's #466 in the Presbyterian The Worshipbook (1972):

Lord of the Strong, When Earth You Trod

1. Lord of the strong, when earth you trod,
You calmly faced the angry sea,
The fierce unmasked hypocrisy,
The traitor's kiss, the rabble's hiss,
The awful death upon the tree,
All glory be to God.

2. Lord of the weak, when earth you trod,
Oppressors writhed beneath your scorn;
The weak, despised, depraved, forlorn,
You taught to hope and know the scope
Of love divine for all who mourn:
All glory be to God.

3. Lord of the rich, when earth you trod,
To Mammon's power you never bowed,
But taught how we with wealth endowed
In meekness' school might learn to rule
The demon that enslaves the proud:
All glory be to God.

4. Lord of the poor, when earth you trod,
The lot you chose was hard and poor;
You taught us hardness to endure,
And so to gain through hurt and pain
The wealth that lasts forevermore:
All glory be to God.

5. Lord of us all, when earth you trod,
The life you led was perfect, free,
Defiant of all tyranny:
Now give us grace that we may face
Our foes with like temerity,
All glory be to God.

The Worshipbook sets this text to a tune Charlotte composed in 1972 by Richard M. Peek. Because it is under copyright (1972 by The Westminster Press) I shan't give it here, but I think it's a fine tune (and for this text an indispensable one, as I don't know any other 88.88.86 tunes off the top of my head).

I know nothing of Mr. Hankey. Was he related to Arabella? Did he write this in the trenches and then die? Maybe someone can clue me in...

Now that I've done a little googling on him, it appears my guess about his death in the trenches (or at any rate at the front) was correct. And I found a place in the Oremus files where the text appears with a recommendation of Old 117th as a tune, which (with a few slurs to stretch the last line to an 8) works pretty well. I haven't found anything to support (nor to preclude) his being related to Ms. Hankey.

Well, before I looked at the printed music, it was hard to match the tune (from the sound file) with the text, which is why I put the music up too.

I have no information about Mr. Hankey.

Just as "All hail the power of Jesus' name" has CORONATION, MILES LANE and DIADEM to throw the untutored prelates into cacophony (an allusion to the recent Jerusalem confab of dissident Anglicans), so too Wesley's "Love divine, all loves excelling" is sung, in different climes and churches, to its own triumvirate of BLAENWERN, HYFRYDOL and BEECHER, this being by far the most common and important of the texts sung to the latter tune these days. Which I note here because BEECHER's several texts were mentioned anonymously in the post. Generally speaking I would say BEECHER predominates among American Methodists, Baptists and those along the evangelical-fundamentalist spectrum, BLAENWERN in England, and HYFRYDOL among American Catholics and ecumenically oriented Protestants. The 2006 Christian Life Hymnal is the only print hymnal I know of that gives the text in all three settings. Unfortunately Hendrickson seems to have discontinued their $5 sample copy offer, but CBD has "slightly imperfect" copies for only $5.62... well worth the investment despite the annoyance of the slight imperfections, which in most cases will cost you a page or so of unusable hymns.

Other texts set to BEECHER that I recall from mid-century hymnals include There's a wideness in God's mercy and Savior, sprinkle many nations.

I sometimes hope that I never have to sing Love divine to BEECHER again. I think I can probably avoid it.

Thanks for the info on the Christian Life Hymnal.

My preference among the three (for "Love divine", that is) is actually BLAENWERN, but it's rare in the US. I think HYFRYDOL is a great tune, but overused, and there are at least two or three other texts I prefer to it. I used it for a little song in my Jonah "oratorio", On a swift Phœnician trader...

BTW and completely off-topic, I posted a fairly extensive thing about English versions of Salve caput cruentatum over at My Little Hymnal that might contain material of interest to you. Is the local-church hymnal you referred to in a more recent post acquirable somehow? (Used or new)

The MCC=SF hymnals were assembled in 1991 - plastic comb bound, so not really permanent. They were used for several years afterward but I know they are no longer in use. Have not been there in about 10 years so I don't know what happened to them.