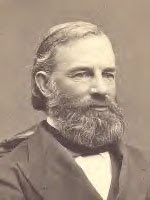 Samuel Longfellow (born June 18, 1819) was the younger brother of famed American poet Henry Wadsworth Longfellow. Samuel's fame was and still is less broad than his brother's, but many of his hymns are as good as any that we sing today.

While still a student at Harvard Divinity School, he and his particular friend, classmate Samuel Johnson, compiled and published the Book of Hymns for Public and Private Devotion, which was used by many liberal churches of the era and went through several editions. Noted Unitarian minister Theodore Parker teasingly referred to it as the Book of Sams. Longfellow and Johnson had gone outside the usual scope of material considered for hymnals and included contemporary poets such as John Greenleaf Whittier and Oliver Wendell Holmes, adapting their verse into hymns.

Following his ordination in the Unitarian church, Longfellow served congregations in Fall River MA and Brooklyn NY (where he met Walt Whitman). He supported abolition, women's suffrage, and was an avowed pacifist. His sermons were described as "serene contemplations, not white and cold, but glowing with interior and suppressed radiance." In 1864, he and Johnson collaborated on another hymnal, Hymns of the Spirit, which contained many of their own hymns. This new book reflected their personal spiritual views as had the previous collection, but in the intervening years their positions had become even more liberal. They were theists and refused to include any texts regarding the divinity of Christ. The hymns under the heading "Christianity" in Hymns of the Spirit only numbered seventeen (out of 717) and there were no communion hymns. The new hymnal was not as successful as their first had been, and might be little more than a footnote today if its name had not been re-used for a combined Unitarian-Universalist hymnal in the 1930s.

But, as Louis Benson writes in Studies of Familiar Hymns (1903):

"There are, no doubt, hymns written by Dr. Holmes, Mr. Longfellow, and other "liberals" which contain their peculiar personal beliefs, some that even sound a note of protest against other peoples' beliefs; and those are passed by, as a matter of course, by churches which profess the Orthodox faith. But the fact of their writing such sectarian hymns does not spoil the quality of such of their hymns as are not sectarian, but are simply religious. Is it not properly a matter of rejoicing that there are so many hymns that religious people of all shades of belief can agree to love and to sing?"

As you may be able to tell, I like Longfellow's hymns. It was actually a challenge to pick just one to present today, so I settled on this one which was reportedly his own favorite, and one that I have known and sung for many years, long before I knew who Samuel Longfellow was.

I look to thee in every need,
And never look in vain;
I feel thy strong and tender love,
And all is well again.
The thought of thee is mightier far
Than sin and pain and sorrow are.

Discouraged in the work of life,
Disheartened by its load,
Shamed by its failures or its fears,
I sink beside the road.
But let me only think of thee
And then new heart springs up in me.

Thy calmness bends serene above,
My restlessness to still;
Around me flows thy quickening life,
To nerve my faltering will.
Thy presence fills my solitude,
Thy providence turns all to good.

Enfolded deep in thy dear love,
Held in thy law, I stand;
Thy hand in all things I behold,
And all things in thy hand.
Thou leadest me by unsought ways,
And turn'st my mourning into praise.

Now, though never stated, Longfellow was obviously addressing God in this hymn. But I have to wonder whether a later editor chose this particular tune to subtly suggest that Jesus was not altogether absent. Nowadays people don't pay much attention to tune names but I'm not sure that was always true. Longfellow and Johnson had not matched tunes to texts in Hymns of the Spirit - it was a text-only hymnal - and so someone else got to pick an "appropriate" tune when they included it in another hymnal some time later.

Longfellow left his Brooklyn church when he felt that his views were becoming too controversial. It was several years until he led another congregation, in Germantown PA. He continued to write hymns that were published in various places. Following Samuel Johnson's death in 1882, Longfellow edited a collected edition of Johnson's works and added his own biographical memoir of his lifelong friend.

You may guess that you'll be seeing more hymns by Samuel Longfellow as time goes on. Correct. "Is it not properly a matter of rejoicing that there are so many hymns that religious people of all shades of belief can agree to love and to sing?"
Posted by C.W.S. at Wednesday, June 18, 2008

What comfort there is in these words of Samuel Longfellow! I am much more orthodox than he was but can certainly love and sing this hymn.

In our present generation of hymnals in the Evergreen Baptist Association, Sam Longfellow is hardly to be found. The three of his hymns that seem to be most prevalent in recent hymnals (none of them extremely frequent) are "God of the earth, the sky, the sea", "Now on land and sea descending", and "Holy Spirit, Truth Divine", but this is last (in our hymnals) usually supplanted by "Holy Spirit, Light Divine" (apparently originally "Holy Ghost, with Light Divine") by Andrew Reed, and/or one of the same incipit by Rowland Hill, of which Longfellow's text seems to be an adaptation or perhaps a critique—see their very different treatment of the "Power divine" theme. Hope's The Worshiping Church is unique in my collection in that it has both the Reed text and the Longfellow, and fully six verses of the latter (The Cyber HymnaL uniquely gives seven, but doesn't give the Reed text at all).

A generation or two past, things were different. In the 1970 (American) Baptist-Disciples Hymnbook for Christian Worship there are six of his texts, one of them in two settings. And in the 1941 Christian Worship I was raised on, there are nine of his texts:
God of the earth, the sky, the sea (MENDON)
Again as evening's shadow falls (CANONBURY)
Now on land and sea descending (VESPER HYMN)
O God, in whom we live and move (BELOIT)
Holy Spirit, Truth divine (MERCY)
Spirit divine, attend our prayers (GRÄFENBERG)
—stated to be both by Sam and by the aforementioned Andrew Reed
Thou, Lord of life, our saving Health (ST. POLYCARP)
Go forth to life, O child of earth (MENDON)
and
One holy Church of God appears (ST. JAMES)

The 1992 UUA Singing the Living Tradition—sadly, the only Unitarian hymnal I have—actually has one or two fewer Sam W. texts than the 1941 Baptist-Disciples book, but a quite different selection; the only one in complete agreement is "Now on land and sea descending"; the others are:
God of the earth... (DUKE STREET)
Again as evening's... (ROCKBRIDGE)
Lo, the earth awakes again (EASTER HYMN, a good non-Christian text for this tune, I think)
The sweet June days are come again (FOREST GREEN)
Light of ages and of nations (IN BABILONE and AUSTRIA)
With joy we claim the growing light (WINCHESTER NEW)

Thanks for the topic. I would indeed be interested to know what exactly the relationship was between Samuel Longfellow and Andrew Reed, who lived long enough that they could actually have been conscious rivals, or collaborators...

Longfellow re-wrote many hymns that were included in his hymnals so that they conformed more closely to his Unitarian beliefs. I think this is the extent of his "collaboration" with the English Andrew Reed.