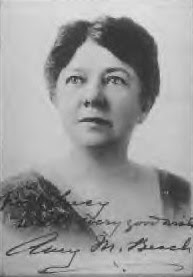 Today we celebrate the birthday of composer Amy Marcy Cheney Beach, born on this day in 1867. She grew up in New England, then settled in Boston. She was the first significant woman composer in this country, but began her career as a concert pianist in 1883. Only two years later she married Dr. H.H.A. Beach (24 years older than she), and agreed to limit her public performances to one per year, for charity. She turned to composition (a more ladylike pastime, in the doctor's opinion) and became very successful before long, publishing her works under the name of Mrs. H.H.A. Beach.

Her larger works include a symphony, the chamber opera Cabildo, the Mass in E Flat, and several extended choral works. She also wrote many art songs and chamber music pieces, as well as a number of anthems (six of them are available at the Sibley Music Library site). For many years she lived in New England in the summer, and New York City in the winter, where she became an unofficial composer-in-residence at St. Bartholomew's Episcopal Church on Park Avenue.

A comprehensive biography, Amy Beach, Passionate Victorian by Adrienne Fried Block was published in 1998. Having sung some of her music, I was interested to read it, and discovered that she wrote one hymn tune, called NORWOOD, which was published in one hymnal, Worship in Song (1943 or 1941 - references differ). The tune was used for the hymn O God of love, O King of peace by Henry Williams Baker. But I also discovered a footnote that referred to two "sketches" she sold to the editor of that hymnal some years earlier. A little detective work uncovered The Hymnal for Boys and Girls, published in 1935, which contains two more childen's hymns with tunes attributed to Beach: PETERBOROUGH and ST. BARTHOLOMEW'S (naturally). This was somewhat exciting, because the biographer had apparently not uncovered these tunes (they were not listed with Beach's other work) I suppose "sketches" is a bit vague, but I'd guess that she at least supplied the tunes, if not the full arrangements. I also had several pieces of service music by Beach published in an Episcopal collection from the early 1940s which were not listed in the biography either. By now I'd guess that they've aleady been uncovered by the biographer for a maybe-someday revised edition.

Unfortunately, all three hymn tunes are still under copyright and not available for us to hear. Worship and Song, in fact, is quite difficult to locate. I couldn't turn up any performances of her choral music online either (though some is available on CD). Someone should definitely put up their rendition of Peace I leave with you (a short but effective anthem). But here's a piano piece, Scottish Legend, from YouTube, which also includes some opening remarks about Beach.

Also, you can watch operatic tenor Jussi Bjoerling perform one of Beach's art songs, Ah, Love, but a day. I think this is from one of the Voice of Firestone programs from the 1950s. It seems a little over-the-top by modern standards, but it may actually be closer to the performance practice of Amy Beach's time.
Posted by C.W.S. at Friday, September 05, 2008

Who published the 1943 Worship in Song? That's one of those ubiquitously recurrent hymnal titles; it's the title, for instance, both of the 1996 Quaker hymnal and of a generation-older nondenominational hymnal referred to in the prefatory matter of the 2008 Baptist Hymnal.

Thanks for the information on this gifted lady.

Both hymnals were published by Appleton-Century, generally known in later years as a textbook publisher. Beach was friends with editor Caroline Bird Parker (they lived in the same NYC apartment building).

The Worship in Song that most often turns up in online searches is published by Lillenas in the 70s (probably the second one you mention).

Yes, I had a terrible time trying to weed out the earlier WiS's in an effort to find a cheap used copy of the 1996 Friends' hymnal; I finally broke down and ordered a new one from the Hymn Society book service (I consider $28 pretty steep for a hymnal), and now I wish I had extra copies to farm out or stuff stockings! Imagine a hymnal with Lennon's "Imagine" (there's no heaven...) in it! Not to mention "The Rose", "Give yourself to love", "Now is the cool of the day", "Last night I had the strangest dream", "War Department", "God who is father, mother, guard and stay" (to National Hymn, yet!), "Paul and Silas, bound in jail"... yet also lots of intriguing inclusivizations of things like "All people that on earth do dwell" and "Once to every soul and nation", unretouched classics from "Great is thy faithfulness" to one verse of "This joyful Eastertide", several shapenote pieces (one with the actual fasola notation), pieces by Billings, "Rise up shepherd" with the "leave your sheep" section, several other unique Christmas pieces... yet (alas!) only 335 pieces in toto. Plus a 32-page hymnal companion section in the back with notes on every song. And all this from a denomination many of whom don't sing in church*! ;-) ;-( ;-\ But I digress, I'm afraid, far from Amy. The (Michael?) Joseph Smith "Scottish Legend" was fun listening. Haven't tried the tenor yet.