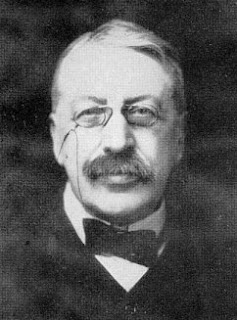 Composer Charles Villiers Stanford was born on September 30, 1852 in Ireland, but spent most of his life and career in England. He composed a wide variety of pieces: seven symphonies, multiple concertos and chamber works, ten operas, and, of course, much sacred choral music and several hymn tunes (list of works and longer biography at the link above).

He was also an acclaimed organist, conducted several choral groups and festivals, and was named the first professor of composition at the Royal College of Music in 1883. Later, he also taught at Cambridge University. His students included most of the prominent English composers of the next generation: Ralph Vaughan Williams, Samuel Coleridge-Taylor, John Ireland, Charles Wood, and Herbert Howells.

Though Stanford wrote several hymn tunes, only one of them is still in wide use today. ENGELBERG was written in 1904 to be sung with For all the saints, but Ralph Vaughan Williams' tune SINE NOMINE, written only two years later, has become the standard tune for that hymn. Stanford's original version of the tune was much more elaborate than we know it today; each verse had different harmony and not all the verses were sung in unison.

The text most commonly sung today with ENGELBERG is by Fred Pratt Green, and is still under copyright. However, you can see and hear When in our music God is glorified at the Oremus Hymnal site, where they have permission to reproduce it.

Some of Stanford's other hymn tunes can be heard at the Cyber Hymnal site, since they are unlikely to be sung in your church. The one I was most curious to hear is called GERONIMO, and I would also like to know how that name came to be matched with the tune. Though it may just be that Stanford thought it was a properly "exotic" one for early 20th-century England.
Posted by C.W.S. at Tuesday, September 30, 2008

Interesting, C.W.S. I know even less about the hymn tune composers than I do about the writers. Thanks.

Well, many hymn lovers prefer the texts alone, and some prefer the tunes, but I've always been interested in both, and especially how they fit together.

For some reason, there were more composers with September birthdays, but in October we're back to a more even division (actually a few more text writers in the next few weeks).

Another text that can be sung well to Engelberg is "All praise to Thee for Thou, O King divine"; I have a couple of hymnals that so set it. And for what it's worth, there's a tune for "When in our music" in the Quaker hymnal that I've never seen anywhere else, called Downing, which is the composer's name. I haven't tried it yet, but now I will.

The other Stanford tune besides Engelberg that is still alive and kicking is St. Patrick's Breastplate, to which most of Mrs. Alexander's translation of the poem so entitled is sung. The Cyberhymnal.org's version of the song gives the mistaken impression that it is all sung to this tune, when in fact the penultimate stanza is sung to the quite different (traditional Irish) tune Deirdre. My online Esperanto hymnal has a midi file of the whole 9-stanza hymn, so in following the words at cyberhymnal.org I suggest you turn off their music and use mine: here. Evangelical hymnals rarely include this hymn, but it is common in hymnals in the Anglican tradition, and also in some RC hymnals. It's in Hymnal 1982 and also in the 2006 Christian Life Hymnal. Usually, however, it is shortened to from five to seven stanzas, with the penultimate one, however, always being sung to Deirdre...

As far as the name of Geronimo, although the immediate anglophone (or at least US-anglophone) association is with a Mescalero war chieftain of the late 1800s and/or with an interjection used in parachuting, it's worth remembering that the name is simply a Spanish equivalent of "Jerome", derived from the Latin "Hieronymus" as in Bosch or the Vulgate's translator. I too would be interested in knowing how and in what intended sense the name became associated with the tune.

Nice to have my commenters back.

Like ENGELBERG, Stanford also wrote a more elaborate arrangement of ST. PATRICK'S BREASTPLATE for Hymns Ancient & Modern which has four-part harmony in three of the nine verses and a different tune for the "Christ be in me" section (replacing DIERDRE). The unison arrangement at the Cyber Hymnal (and generally used in modern hymnals) usually only uses seven of the verses.

How do I find the original version of Engelberg (with parts) that you speak of here? It sounds like you have seen it.

Stanford's original setting ois ENGELBERG may have been written for the 1904 ediion of Hymna Ancient & Modern, which can be downloaded from Google Books. The tune appears at Hymn #220.

If the link doesn't work, just search for "Hymns Ancient and Modern" in Google books and look for the 1904 edition which should be near the top oof the page.