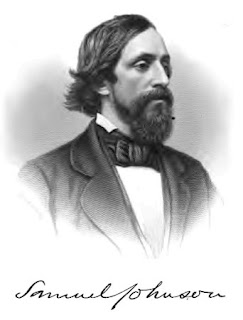 The Samuel Johnson we are talking about today (October 10, 1822 - February 19, 1882) was a New England clergyman and hymnist who collaborated with Samuel Longfellow on two hymnals in the nineteenth century that were influential beyond their actual use in churches of the day. I say this because most internet searches you might make will turn up a more famous Samuel Johnson, the prolific English writer (in fact, Wikipedia erroneously links this Johnson to our Longfellow).

Our Johnson was a student at Harvard Divinity School when he met Longfellow. As told by Longfellow, one of their fellow students, who had graduated and was pastoring a nearby congregation, complained to the two that his new church used "...a very antiquated and unsatisfactory hymn-book. So we told him one day that we would make a new one for his use." This was A Book of Hymns for Pub­lic and Pri­vate De­vo­tion, published in 1846.

Johnson graduated from HDS in July of that year and began preaching in various Boston and Cambridge churches. For over a year he was associated with a Unitarian congregation at Harrison Square, but some thought that he tended to bring political ideas into the pulpit. In a letter from Johnson to the Church Committee, he writes:

Gentlemen, I have received your note of January 8, in which you request me not to introduce any political subject into my discourses next Sunday. [...] It was not my intention to preach on the application of Christianity to any special political subject, but I reserve the right to do so, on all occasions. I do not wish, while preaching at the invitation of your committee, to interfere with your express request, and you will therefore not be surprised that I request you to make some other arrangement for the supply of your pulpit next Sunday.

Eventually, Johnson settled at a Free Church (determinedly outside any denomination) in Lynn, a town north of Boston, and pastored there for nearly twenty years. In a memoir published after Johnson's death, Longfellow writes of his theology:

The inward call to preach, and the outward call of those who wished to hear, were to him sufficient seal of the ministry of religion to which he had devoted himself. Nor did he ever "administer the sacraments." The religion that he preached was natural religion {...}. It was simply another name for truth, freedom, piety, righteousness, love, as it might be given to him to see their various aspects and their applications to present needs.

While on a year-long trip to Europe in 1860, during a particularly rainy stretch in Nice, Johnson and Longfellow began work on their second hymnal, Hymns of the Spirit, which was published in 1864. This hymnal was considered more radical as it was less inclined toward hymns specifically related to Jesus. It was not widely used by congregations, but it was respected, and many of the hymns by Johnson, Longfellow, and the authors they published migrated to later hymnals and are still sung today.

In the following hymn, written for the dedication of a new chapel for the Lynn Free Church, Johnson expresses both his wariness of sacraments and his desire that the church be relevant to the present time.
To Light, that shines in stars and souls;
To Law, that rounds the world with calm;
To Love, whose equal triumph rolls
Through martyr's prayer and angel's psalm --
May purer sacrament be here
Than ever dwelt in rite or creed,
Hallowed the hour with vow sincere
To serve the time's all-pressing need.
Here be the wanderer homeward led,
Here living streams in fulness flow,
And every hungering soul be fed,
That yearns the eternal will to know.
Speak, Living God, your full command
Through prayer of faith and word of power
That we with earnest hearts may stand
To do your work and wait your hour.

Samuel Johnson, 1864; alt.
Tune: ANTWERP (L.M.)
William Smallwood, 19th c.
The two men were often criticized for altering the words in the hymn texts of other writers when they included them in their hymnals. They believed that the theology expressed in hymns should be specifically tailored for the congregations that would be singing them, but they did not want to reject the great wrters of the past. They were doing what hymnal editors had always done and still always do, but they may have been a bit more industrious at it.

Toward the end of his life, Johnson found that his hymn Father, in thy mysterious presence kneeling had been published in a new hymnal, and the first word had been changed to Savior (thus substituting Christ for God). He wrote to Longfellow, seemingly unaware of the irony, "I have written calmly to the reverend Dr. who compiles the Presbyterian Hymn-book for putting a radical of thirty years into the ranks of pronounced Orthodoxy."
P.S. We have already seen another hymn of Johnson's a few weeks ago.
Posted by C.W.S. at Friday, October 10, 2008

One of the many things I've learned from reading your blog, C.W.S., is the freedom with which hymn writers and gatherers change the words of hymns written by others. I find that very interesting in light of the fact that in other types of writing that would be so frowned upon. So the irony of Samuel Johnson objecting to someone doing to his hymn what he had been so free to do to others is really quite funny to me.