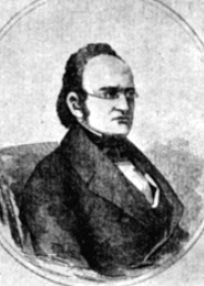 On October 17, 1792, John Bowring was born in Exeter, England, into a Unitarian family (this seems to be a week for Unitarian hymnwriters). He wanted to enter the clergy, but his family persuaded him to go into trade -- his father was a cloth merchant. Due to a natural ability with languages that he had exhibited quite early, (he was eventually fluent in at least eight, and conversant with several more, though perhaps not the two hundred he claimed at one time) he began his own merchant business and often traveled internationally. However, his business ventures were not successful, either at this time or later in life.

He turned to politics, becoming editor of the Westminster Review, a "radical journal." He was elected to Parliament, and went on some international trade missions. He was knighted in 1854, and also was made Governor of Hong Kong in that year.

Bowring wrote and translated much poetry as a sideline to his trade and political occupations. His hymns mostly appeared in two collections of his work: Matins and Vespers, and Hymns, as a Sequel to the Matins. He also wrote books from some of his Asian travels, as well as The Decimal System in Numbers, Coins and Accounts (exciting, I'm sure).

His most popular hymn is surely In the cross of Christ I glory but I have always liked this one:

God is Love, with mercy bright'ning
All the paths in which we rove,
Waking bliss and sorrow light'ning,
God is Wisdom, God is Love.

Chance and change are busy ever,
Randomly the ages move;
But God's justice waneth never,
God is Wisdom, God is Love.

Always with our cares entwining
Hope and comfort from above,
Everywhere in glory shining,
God is Wisdom, God is Love.

(Musically we're back to Vaughan Williams; this is one of the English folk songs that he arranged into a nice little hymn tune in The English Hymnal.)

For all Bowring's success and accomplishments in many areas, he was not always well-liked personally, and his finances were apparently a mess. Though he had remained a practicing Unitarian all his life and was active in Unitarian causes, his Autobiographical Recollections, edited by one of his sons in 1877, five years after his death, makes no reference to his faith. Regardless of all that, many of his hymns lived on in many hymnals, and we still know a few today.
Posted by C.W.S. at Friday, October 17, 2008

Yes, I like the text and the tune, though I think I'd have simply changed "His" to "whose" in the first line (assuming I wanted to change anything).

"Who" and "whose" are often useful substitutes for "he" and "his" but generally, I've found, where there's only one or two to change. This hymn required a more extensive rewriting, e.g., making the verb tenses agree. And there were a few other tweaks thrown in for various reasons.

I especially like the tune, Sussex. I think the hymn text suits it very well too. Perhaps John Bowring was not the most likeable person but his words convey a feeling of comfort and rest.

Thanks for posting John Bowring's fine hymn, "God Is Love, His Mercy Brightens." You're right, not as well known as "In the Cross of Christ I Glory," but of equal merit I think.