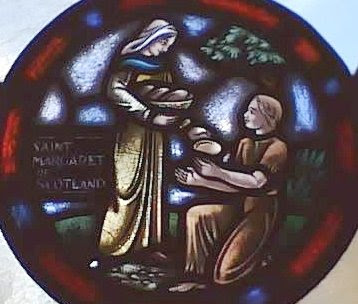 November 16 is the feast day of Saint Margaret of Scotland (c.1045 - 1093). She was born of English nobility, raised in exile in Hungary, and returned to England in 1066 when her brother Edgar attempted to take the throne after the death of their uncle King Edward the Confessor. Their attempt failed (you may have heard of William the Conqueror) and they fled to Scotland, where Margaret was later married to the Scottish King Malcolm III.
As Queen Margaret, she was active in church reform, bringing the practices of the Celtic church closer to the Roman church, and inviting the Benedictine order to establish monasteries in Scotland. She reportedly rose at midnight daily to attend church services. She was widely known for deeds of charity, and would not eat each day until she had served food to someone in need. She visited and cared for the sick, and set up hostels for the poor. At various times, especially during Lent and Advent she would give feasts for a few hundred commoners in the royal palace. However, there is a legend that no one ever recalled seeing her laugh or smile, so perhaps her piety came at a price.
She was canonized in 1250, and in 1673 was declared the (female) patron saint of Scotland. She came from a rather saintly family, which included her aforementioned uncle, Saint Edward the Confessor and her son, Saint David of Scotland.
I know of no hymns to St. Margaret (though there may well be some in Scotland), but of course there is a Victorian hymn tune named for her.
O Love that wilt not let me go,
I rest my weary soul in thee;
I give thee back the life I owe,
That in thine ocean depths its flow
May richer, fuller be.
O Light that followest all my way,
I yield my flickering torch to thee;
My heart restores its borrowed ray,
That in thy sunshine’s blaze its day
May brighter, fairer be.
O Joy that seekest me through pain,
I cannot close my heart to thee;
I trace the rainbow through the rain,
And feel the promise is not vain,
That morn shall tearless be.
O Cross that liftest up my head,
I dare not ask to fly from thee;
I lay in dust life’s glory dead,
And from the ground there blossoms red
Life that shall endless be.
George Matheson, 1882
Tune: ST. MARGARET (8.8.8.6.)
Albert Lister Peace, 1884
George Matheson and Albert Lister Peace both wrote other hymn texts and tunes, respectively, but none so well known and loved as this one. Matheson was Scottish, so I wonder whether Peace chose his tune name for this text with that in mind.
P.S. The window above is actually from my own church, depicting Margaret feeding the poor.

This is another unfamiliar hymn for me but I love those words! It might even make it to my top ten favorite hymns...

The stained glass window is lovely, C.W.S. I love traditional church buildings. How fortunate you are to be able to call one your own!

Dorothy, I hope you get to sing this hymn someday in worship -- really try it out!

Our current building was built around 1930, but in an older Gothic style (I guess). It's the fourth building of the parish, which dates back to the eighteenth century.