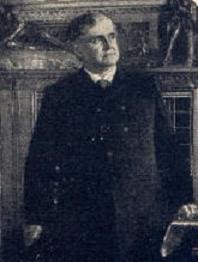 The Episcopal calendar of saints remembers former Bishop of Massachusetts Phillips Brooks (December 13, 1835 - January 23, 1893) on this day. Born in Boston, he graduated from Harvard in 1855 and was ordained in 1859. He first served two churches in Philadelphia, where he was known for his anti-slavery views and for a widely-circulated sermon he delivered shortly after the assassination of Abraham Lincoln.

In 1869 he was named rector of Trinity Church in Boston, where he stayed intil 1891, when he accepted the post of bishop, which he was only to hold for 15 months. He once claimed that the theme of all his sermons was from John 10:10 -- "I have come that you might have life, and have it abundantly." His funeral service packed the huge sanctuary at Trinity, and more than 10,000 people who were not able to get in waited outside in Copley Square.

His great fame was largely due to his renowned preaching; several volumes of his sermons were published as well as smaller books of quotations, marking him as quite a celebrity. If he had been born a hundred years later he'd have had his own television show. Since he never married, there has also been some speculation about his personal life.
Though it's now a bit out of season, it would be foolish not to remember his most familiar hymn today, a Christmas carol known and sung around the world.

O little town of Bethlehem,
How still we see thee lie!
Above thy deep and dreamless sleep
The silent stars go by.
Yet over thy streets shineth
The everlasting Light;
The hopes and fears of all the years
Are met in thee tonight.

For Christ is born of Mary,
And gathered all above,
While mortals sleep, the angels keep
Their watch of wondering love.
O morning stars together,
Proclaim the holy birth,
And praises sing and anthems ring,
And peace to all on earth!

How silently, how silently,
The wondrous gift is giv’n;
So God imparts to human hearts
The blessings sent from heav’n.
No ear may hear his coming,
But in this world of sin,
Where meek souls will receive him still,
The dear Christ enters in.

Where children pure and happy
Pray to the blessèd Child,
Where misery cries out to thee,
Born of a mother mild;
Where charity stands watching
And faith holds wide the door,
The dark night wakes, the glory breaks,
And Christmas comes once more.

O holy Child of Bethlehem,
Descend to us, we pray;
Cast out our sin, and enter in,
Be born in us today.
We hear the Christmas angels
The great glad tidings tell;
O come to us, abide with us,
Our God, Emmanuel!

When writing this text, Brooks must have been remembering his own trip to the Holy Land, where on Christmas Eve, 1865, he assisted with the midnight service in Bethlehem. The fourth verse is sometimes omitted in hymnals, and I'd imagine that many churches sing even fewer verses than that in crowded Christmas services, but the entire text is worth preserving. Lewis Redner was the organist at the Church of the Holy Trinity in Philadelphia when Brooks was the rector there, and he wrote the tune the night before it was sung in worship for the first time on Christmas Day, 1867.

Phillips Brooks wrote a few other verses and hymn texts, but not many. In 1903, a small collection titled Christmas Songs and Easter Carols was published, though none are as well-known as O little town of Bethlehem, the first selection in the book.
Posted by C.W.S. at Friday, January 23, 2009

I'm intrigued by the speculation about Brooks being gay; but aside from his celibacy is there any evidence for this? The sermon about him and Helen Keller, which was a good read, seemed to jump to this from no particular springboard. Was Redner his partner as well as his organist? He did name the tune SAINT LOUIS after him, and that is certainly a term of endearment when not applied to long-dead kings.

Incidentally, I commend you for keeping the original tune for this text. So often the liturgical churches seem to prefer FOREST GREEN just because Dearmer and Vaughan Williams did... F.G. is a fine tune in its own right, and works okay with this text, but there are so many other texts that need it worse...

No, ST. LOUIS is the proper American tune, I think -- the British can do what they like.

I haven't really done enough reading about Brooks to see where the speculation comes from, though I've been aware of that article for a while. Don't think there's any other connection with Redner, though.