William H. Doane (February 3, 1832 - December 23, 1915) was a prolific and popular composer of gospel songs (perhaps as many as six hundred) who also wrote some texts and edited at least forty-three collections. However, he was also quite a successful businessman who ran a woodworking company in Cincinnati, so his extensive musical endeavors were "only" a sideline.

In Cincinnati he belonged to the Mount Auburn Baptist Church, where he was also the superintendent of the Sunday school for many years. He received a Doctor of Music degree in 1875 from Denison University in Granville OH. In later years he was a major donor to Denison, the William Howard Doane Library (original building pictured below) being one of his gifts.

He worked with many of the important gospel song writers and composers of his day, particularly Robert Lowry and Fanny Crosby. Doane wrote the tunes for some of Crosby's most well-known songs, including this one.

Pass me not, O gentle Savior,
Hear my humble cry;
While on others thou art calling,
Do not pass me by.

Refrain
Savior, Savior,
Hear my humble cry;
While on others thou art calling,
Do not pass me by.

Let me at thy throne of mercy
Find a sweet relief,
Kneeling there in deep contrition;
Help my unbelief.
Refrain

Trusting only in thy merit,
Would I seek thy face;
Heal my wounded, broken spirit,
Save me by thy grace.
Refrain

Thou the Spring of all my comfort,
More than life to me,
Whom have I on earth beside thee?
Whom in heav’n but thee?
Refrain

There's an affectionate parody song written some years ago by J. Thomas Sopko that uses this tune that begins "Sing a song by Fanny Crosby/Every Sabbath day..." with the refrain:

Pastor, Pastor,
Hear my irate cry:
When you pick the hymns for Sunday,
Don't pass Fanny by!

It continues for three verses, I believe. I suppose I should try to locate Mr.Sopko sometime to get permission to post the whole thing (he has a few other more serious items that would fit in here as well). 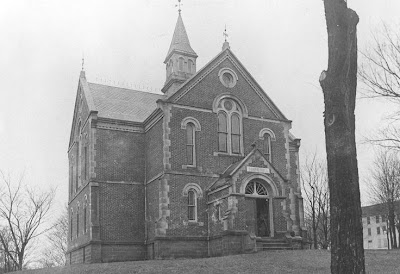 My wife groaned when I sang that little snippet to her, but I for one would love to see the whole parody.

Unfortunately I don't remember all the verses any more. If I get in contact with him I'll ask about posting the whole thing.

I see that my oldest Baptist Hymnal, the 1883, had W. H. Doane for its editor-in-chief. He and Fanny were both well but not excessively represented, i.a. by "Pass me not", but a couple of her most widely sung hymns (in my experience), namely "Praise Him! Praise Him!" and "To God be the glory", were absent. I wonder why; Doane was involved in first publication of the former in 1869, and he wrote the tune for the latter in 1875. The latter is unusual among the tunes associated with well-known Fanny Crosby texts in that it has also been used for other, later texts, such as Margaret Clarkson's 1966 "Sing praise to the Father", which is set to the Doane tune in the 1990 Hope hymnal The Worshiping Church (Clarkson originally had set it to a tune of her own composition).

I remember one verse:

"Gregory the Great is no saint
For us Protestants!
We've rejected his theology;
Why must we endure his chants?

I did eventually get permission from Tom to put the whole thing online for Fanny Crosby's birthday in 2010, which you can find at the bottom of this entry:
http://conjubilant.blogspot.com/2010/03/fanny-crosby.html

If you tell me a little more, Anonymous, I might know who you are...